Raleigh freshman competes on "Who Wants to Be a Millionaire" 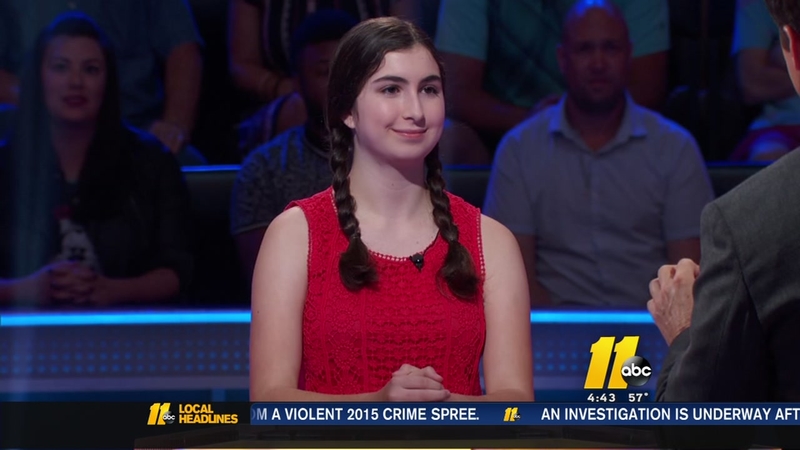 A Raleigh teen is about to make her national game show debut on Who Wants To Be A Millionaire on Wednesday, February 7 and Thursday, February 8. Enloe High School freshman Hayley Minter, 15, learned about the auditions through the Duke Tips program last summer.

She sent in a video audition and had a few interviews before appearing on the show in Las Vegas.

"I was shaking by the end of it but, it's kind of like you don't really notice it when you're on there, " Minter said.

"Leading up, it's nerve-wracking but once there it felt kind of natural," she said.

Hayley Minter, 15, competes on "Who Wants to Be a Millionaire" in Las Vegas.

Minter said she plans to study Acting or Performing Arts and Psychology in college and would absolutely appear on another game show if she gets the chance.

You can see how Hayley does on "Who Wants to Be a Millionaire" at 2 p.m. on ABC11.
Report a correction or typo
Related topics:
arts & entertainmentraleighwake countymillionaireentertainmenttelevision
Copyright © 2022 WTVD-TV. All Rights Reserved.
TOP STORIES
Cooper 'more concerned' about this winter storm than the last one
Winter storm likely to hit east of I-95 hardest
Schools in Wake, Durham counties to close Friday
Contact tracers' role changes as pandemic reaches new heights
Flavor District, Triangle's largest 'ghost kitchen' to open in fall
Residents in Wilson prepare for black ice and snow
Reporter hit by car on live television, but continued reporting
Show More
Check your tires before -- and after -- the wintry weather
American Airlines flight diverted over maskless passenger
Only one monoclonal antibody treatment is effective, NIH says
Florida doubles down on anti-critical race theory legislation
LATEST: Governor says focus on vaccines, testing -- not mandates
More TOP STORIES News