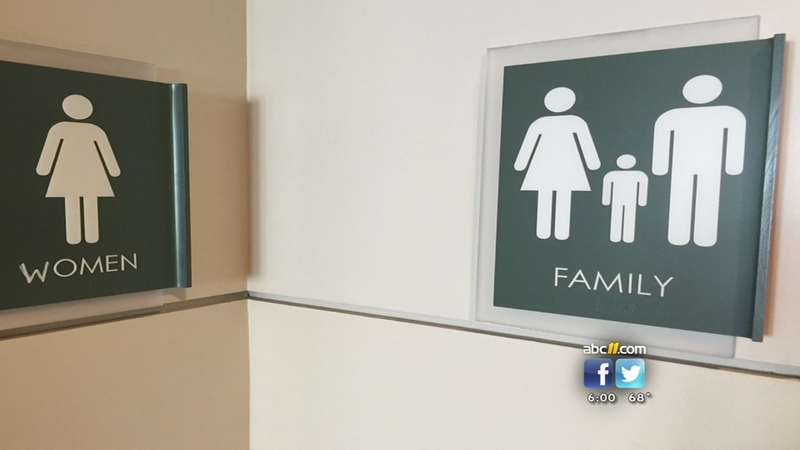 RALEIGH (WTVD) -- Signs protesting House Bill 2 have started popping up at businesses throughout the Triangle. The flyer posted outside of Clyde Cooper's BBQ in Raleigh encourages customers to "go where you feel best" if you need to use the bathroom.

"I think it's very important for everybody to be their own self," said owner Debbie Holt. "I don't think it has to be this big of a deal. I think it's been going on for years. People haven't scowled about it. But now more people are raising cane about it in North Carolina."

Some businesses are finding themselves in a position where they have to pick a side, to stand behind or against HB-2.

Several people who have booked events at the Raleigh Convention Center have been reaching out to the city, wanting to know its policy.

"As soon as it hit the press that this passed and the governor signed it, is when people started having a reaction to it," said Raleigh Communication Director Damien Graham.

The city said its legal team is looking into the matter and no clients have cancelled events yet.

"They're questioning what this means for them and we're all asking that same question. There's a lot to this bill. So our attorneys are taking the time to read all the language so they get an understanding what the potential impacts might be," Graham explained.

Gov. Pat McCrory has received harsh criticism after signing the legislation into law last week, but he is not backing down from his position. His campaign sent out a press release Wednesday mocking New York's travel ban.

HB-2 bans local governments from adopting anti-discrimination rules. It was designed to supersede a Charlotte ordinance, which passed, that would have allowed transgender people to use the bathroom with which they identified.

Businesses are exempt from the law. They decide the rules and policies for their establishments.

We tried to find a business in our area willing to publicly support HB-2. Some owners told us they agree with the legislation, but would not take a public position.

Bishop Dr. Patrick Wooden of the Upper Room Church of God says the law is being misrepresented and it was intended to protect the public.

He says the backlash from some companies is hypocritical.

"We have uproar from companies like Apple, who threatening to pull out of North Carolina, but they do business in China and no country has worse human rights record," said Wooden.

There will be a prayer vigils across the state Thursday in support of the law. One is scheduled at 7:00 p.m. outside of the Governor's Mansion. Click here for more information.

Residents like Angela Gilmore worry what HB-2 will do for Durham's reputation as a diverse, tolerant city.

"Both my wife and I feel very much welcome and part of the community," Gilmore said.

Gilmore is a plaintiff in the House Bill 2 federal lawsuit filed Monday. Opponents of HB-2 say the bill is sending the wrong message about the state and cities like Durham.

Shelly Greene, CEO of Durham's Convention and Visitor's Bureau, says actions like Tuesday's anti-HB2 demonstration in Chapel Hill could make people think twice about the state for vacations or business.

Some folks living in the state are now considering a move out of North Carolina.

"We've been traveling around the state, looking at small towns where we might retire, but I don't know if we'll be able to." Gilmore explained. There may be state that'll be more welcoming, that will appreciate our talents and allow us to share our talents without being afraid."