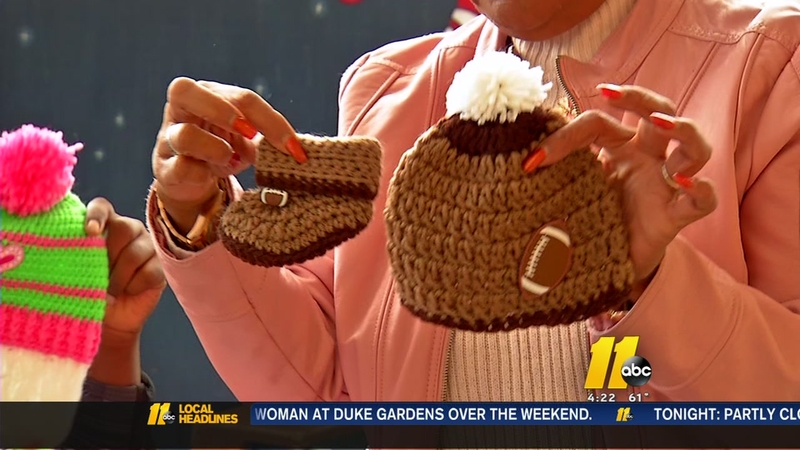 A heart- and head-warming tale: Hats for cancer patients

GARNER, North Carolina (WTVD) -- A 12-year-old from Garner and her grandmother are trying to bring a little holiday cheer to sick children at Duke Children's Hospital.

The two have knitted more than 100 hats, and the girl's aunt has stitched together dozens of blankets.

The preteen has a very personal reason for doing so.

"At 3-years-old she was diagnosed with leukemia," Helen McNeil said of her granddaughter Ryan Thomas.

Thomas spent most of her early childhood in and out of the hospital for eight years, but she's finally won her battle with cancer.

"I feel great, and I hope other kids get to feel like how I do," Ryan said.

It's why she asked her grandmother if she would help her knit hats for children at the hospital. McNeil said it's their way of paying forward all the love and support they had during Ryan's battle.

"There would be that one person that would come through with a coloring book, or a silly song, or something that would just, you know, change the atmosphere in the room and just make things better for her that day," McNeil said.

They've delivered more than 150 hats and 80 blankets in hopes of brightening someone else's day.

The project is called "Ryan's Hats of Hope for Little Warriors," and they hope others will want to join them to reach more youngsters at other hospitals.

"Every time I came in, I'd always see a couple kids either being held in by a stroller, having so many tubes connected to them, I said 'those are warriors,'" Ryan said. Because if they can fight all of this, then they are fighting a bigger battle than themselves."

"It's so personal, and you touch everything, and you kind of live everything that you touch, McNeil said of crocheting the hats. "So I said, what an opportunity to share a prayer or a good thought while you're thinking about somebody and wishing for the best for them.

"Hopefully," she added, "one hat will make a difference."