While battling rare form of brain cancer, this Clayton 11-year-old is giving back through jewelry 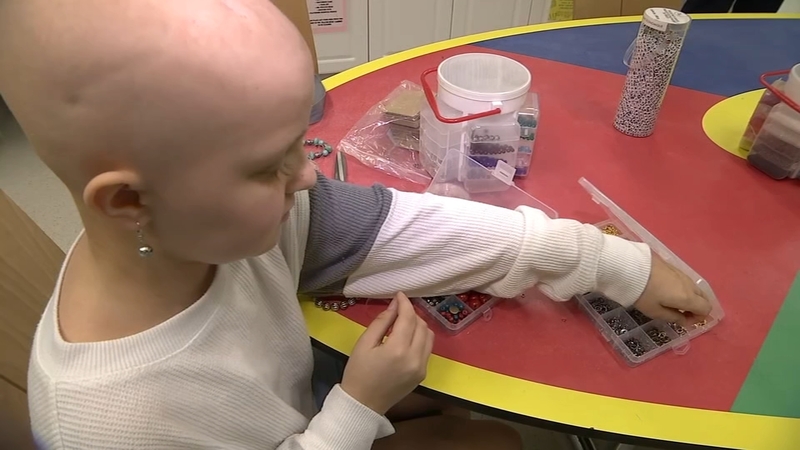 We met McKenna Gardner at Duke Children's Hospital just before she headed into her second round of chemotherapy.

Earlier this year, she was diagnosed with an extremely rare form of brain cancer. Her head shows where Earl, her tumor named after the country trio Dixie Chick's hit song "Goodbye Earl, had been.

"One soccer game, my head felt like it was going to explode," the 11-year-old said, describing the days before her diagnosis.

Before cancer she was active -- playing soccer and riding horses.

"All the things I used to do, I couldn't do anymore," Gardner said.

For McKenna, jewelry making was a way to pass the time.

"We realized that she was doing a great job at it," Ryanne, Mckenna's mom, said. "And she said 'you know, maybe I could sell these and we could give money back.'"

McKenna's Mission it would be called.

McKenna's goal? To sell the jewelry she's made, raising money to hopefully bring more activities to the unit for other kids her age.

McKenna's dad and brothers wear her jewelry in support. The family of six was saving up for a new home when Earl appeared. Cancer left the family adding on to their current home, forfeiting the dream of a new one.

McKenna's treatment should be complete in December.

if you would like to make a donation to the Gardner family, there is a GoFundMe page set up. If you'd like to buy some of McKenna's jewelry, you can do so on her Facebook page.
Report a correction or typo
Related topics:
health & fitnessclaytonabc11 togethercancerjewelryfundraiser
Copyright © 2022 WTVD-TV. All Rights Reserved.
TOP STORIES
New law protects you from surprise medical bills
LATEST: Is it worth waiting in long line to get COVID-19 test?
Airlines ask Biden administration for 'immediate intervention' on 5G
Omicron surge hasn't peaked nationwide: US surgeon general
Patio igloos installed outside Cary restaurant
Cold case team shines new light on betrayal of Anne Frank
Monthly tax credits end, force some NC families to make cuts
Show More
Icy roads a morning threat as temperatures dip into the 20s overnight
Triangle Restaurant Week returns to highlight local small businesses
Deputies investigate shooting at Harnett County home
Jewish community strives to 'stay strong' after Texas synagogue terror
Dozens of RDU flights canceled through Monday evening
More TOP STORIES News