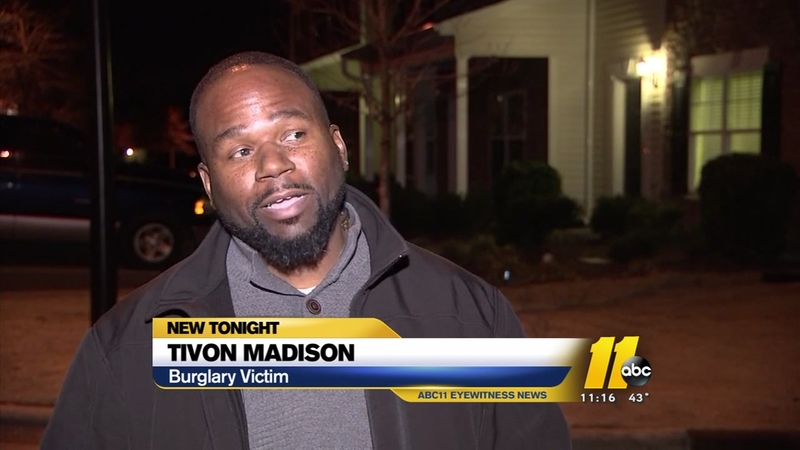 DURHAM. North Carolina (WTVD) -- The string of crimes in this corner of Durham County would be frustrating to any community - but one of the victims whose car was broken into is using the crime as more fuel for his life's mission.

"The morning I got up to go to work, I noticed that there were items that were supposed to be in the glove box on the passenger seat," Tivon Madison said.

Madison's BMW was hit by thieves some time overnight Wednesday as he was sleeping at his mother's home on Cozart Street.

This RTP computer network engineer quickly realized he'd become the latest victim in what's been a string of break-ins in this stretch of north Durham: at least 13 home and car break-ins within this same stretch in the last 30 days.

"Nothing was exposed, everything was in the trunk," Madison said.

The thief broke into the car and popped the trunk where Madison was storing many of the digital tools he uses for his non-profit, Emerging Entrepreneurs.

The crook stole two of the cameras, a computer, and memory cards that Madison uses to inspire at-risk youngsters in Wake and Durham county schools to explore careers in science and technology. The small organization is teaching computer coding to children as young as 5 years old.

Whoever is preying on homes and cars on Madison's mother's neighborhood is still on the run. But Madison said the crimes only strengthen his belief that his mission to inspire at-risk kids is well worth it.

"If (the thief) is an individual that is on the younger side of things, there's hope," Madison said. "We have scholarships, internships, there's a better way."
Report a correction or typo
Related topics:
durhamdurham countyeducationbreak innonprofitdurham county news
Copyright © 2021 WTVD-TV. All Rights Reserved.
More Videos
From CNN Newsource affiliates
TOP STORIES