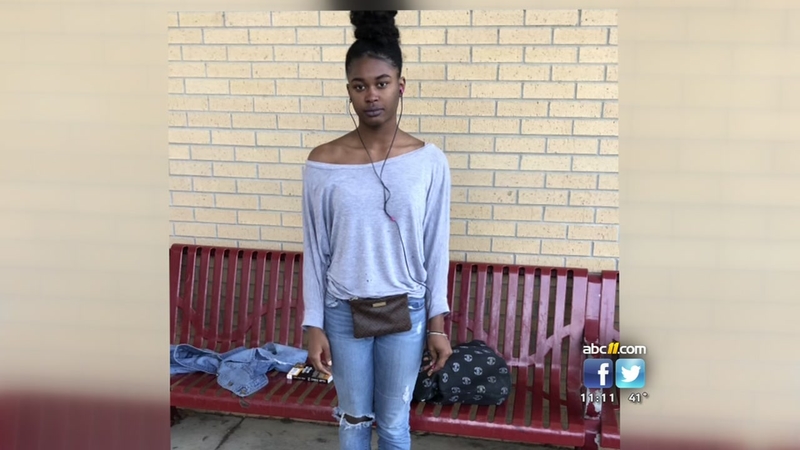 RAEFORD, NC (WTVD) -- Hoke County High School is under fire after an administrator pulled a student off the bus, citing inappropriate clothing.

The video of India Middleton picking up her daughter from school and checking the locked doors of Hoke County High School has garnered the attention of thousands.

"I don't send my children out here in provocative clothes to break any rules at school," said Middleton, whose 16-year-old daughter, Makhigha Davis attends the school. "I feel like that could have been handled a different way."

Middleton said that Friday after school, she received a call from her daughter telling her that she wouldn't be on the school bus because the assistant principal at the school refused to let her ride home because of her shirt.

Is she showing too much shoulder for a 16-year-old? @HokeCoSchools officials think so. She wasn't allowed to ride the school bus home Friday because of it and that made her mother furious. Story tonight at 11 on #ABC11. pic.twitter.com/Xa0Ax7oxDF

Makhigha said she waited inside the school for as long as she could until the last staffer left.

"She said, 'you have to wait outside because I'm about to leave and the office is about to close,'" Makhigha said.

Her mother arrived nearly two hours later to pick her daughter up and no school staff was there.

Makhigha said she went the entire school day without any teachers commenting on her shirt.

"For you to have those doors locked, it's unfair to children," said Middleton.

ABC11 reached out to Hoke County Schools, and officials quickly took responsibility in a statement:

"Hoke County Schools will not make excuses for the poor judgement demonstrated by the assistant principal. The best course of action would have been to allow the student to get on the bus Friday. All administrators understand that if a child is pulled from a bus then they are responsible for that child's supervision until they are safely picked up by a parent."

The school district's response wasn't enough for Middleton, who hasn't sent her child back to the school since.