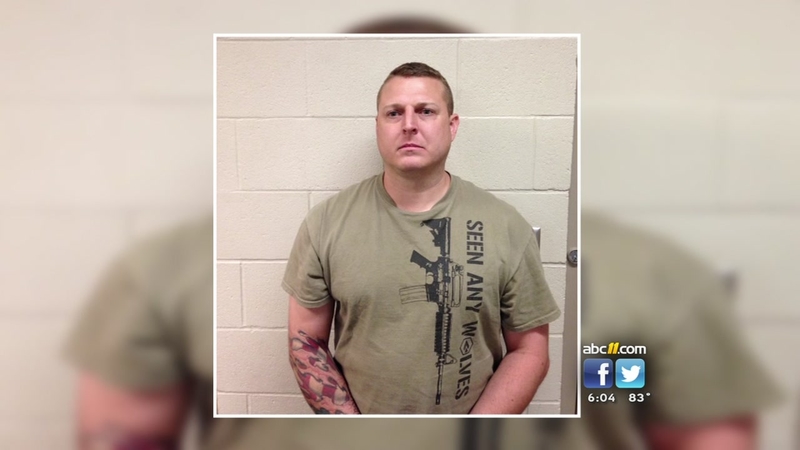 RAEFORD (WTVD) -- Fort Bragg officials have confirmed to ABC11 that the man facing charges in connection with an incident at a mosque in Hoke County on Thursday is a major in the United States Army Reserve.

The incident started in the afternoon when two open packages of bacon were found at one of the entrance doors of the Masjid Al-Madina mosque on Pittman Grove Church Road in Raeford.

It was considered an insult, because Muslims are prohibited from consuming pork products.

Sheriff Hubert Peterkin said that members of the mosque then spotted a Chevrolet Tahoe parked in the parking lot. One of the members decided to leave and began driving home when they noticed the same Chevrolet Tahoe following them.

The member tried to evade the Chevrolet Tahoe but could not, according to authorities.

Later in the evening officials said the driver of the Chevrolet Tahoe, 36-year-old Russell Thomas Langford of Fayetteville, returned and made death threats against members of the mosque. Langford is assigned to the G3 unit of the U.S. Army Reserve Command at Fort Bragg.

Following the incident, an official at the mosque told ABC11 a man armed with a gun "threatened violence" and also tried to run over someone in the parking lot.

"He tried to run me over ... it's sad - we bring children here," said Mohammed Tareen a member at the mosque.

"This is very sad," said an official at Masjid Al-Madina mosque. "We don't espouse that. We want to live in harmony. But this gentleman definitely has some issues and we hope that this is an isolated case."

He was given a $60,000 bond, but according to arrest records, he has since bonded out of jail. Langford is currently being held in military custody at Fort Bragg.

For Muslims, this is the holy month of Ramadan and prayer services were underway Thursday evening. Now, some are calling what happened a hate crime, and want the FBI to investigate it as such.

"We call on state law enforcement authorities and the FBI to investigate this incident as a possible hate crime. We also ask local police to step up patrols in the area of this and other North Carolina mosques, particularly during the nightly activities associated with the ongoing fast of Ramadan."

During Friday morning prayer services, there was an increased police presence seen at the mosque.

The Hoke County Sheriff's Office has said an investigation is ongoing.

Army officials said Langford did two combat tours in Iraq in 2004 and 2008 and earned an Army Commendation Medal.