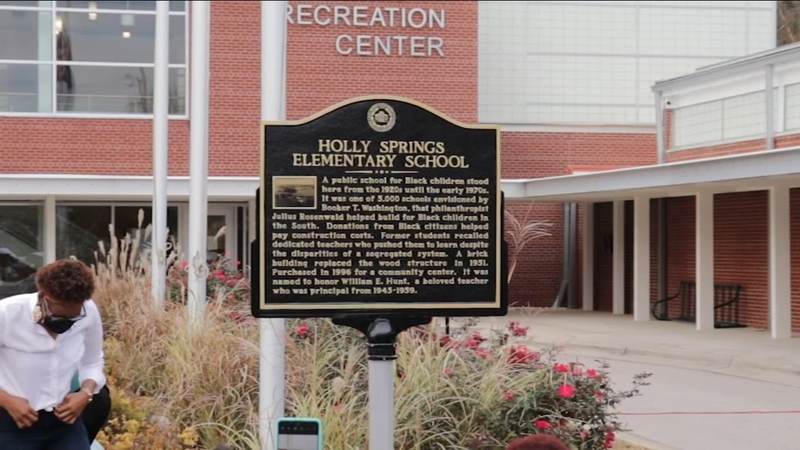 The marker dedicated to the historic Holly Springs Elementary School was unveiled on Sunday afternoon by the alumni and community members at the W.E. Hunt Recreation Center on Stinson Avenue.

Holly Springs Elementary School operated from the mid-1920s until desegregation around 1970. For nearly 50 years, the school for Black children sat where the recreation center now stands. Black students would attend the school before moving on to attend segregated high schools in Fuquay- Varina or Apex.

The community center that now stands in its place was named after William E. Hunt, a beloved man who served as principal for the elementary.

Historic records said financing to build the four-teacher school came from a fund established by President of the Sears, Roebuck and Company, Julius Rosenwald (now known as Sears). The fund provided plans and grants to help public schools for black children in the rural South.

A partnership between the community and the town of Holly Springs paved the way for today's unveiling.

The sign reads:
"A public school for Black children stood here from the 1920s until the early 1970s. It was one of 5,000 schools envisioned by Booker T. Washington, that philanthropist Julius Rosenwald helped build for Black children in the South. Donations from Black citizens helped pay construction costs. Former students recalled dedicated teachers who pushed them to learn despite the disparities of a segregated system. a brick building replaced the wood structure in 1951. Purchased in 1996 for a community center. It was named to honor William E. Hunt, a beloved teacher who was principal from 1945 - 1959."

The school was originally referred to as the "Plank School" due to it being made of planks before it was replaced by a brick building.