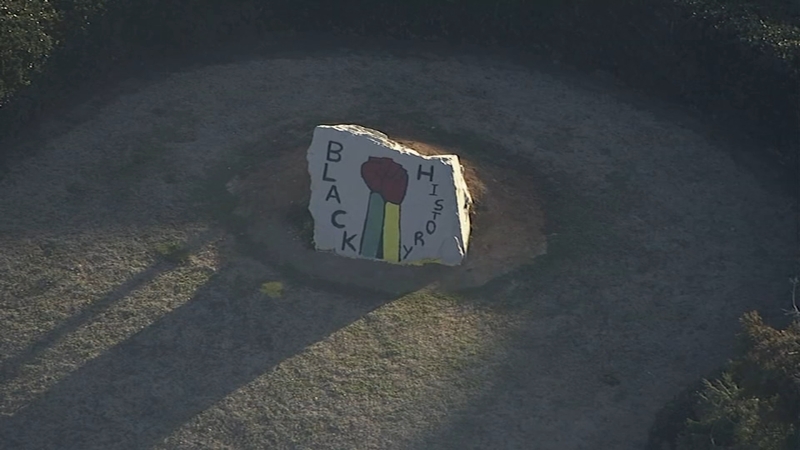 HOLLY SPRINGS, N.C. (WTVD) -- As you enter the campus of Holly Springs High School, directly in front of the school is a large rock, aptly dubbed 'spirit rock'.

This rock is often painted month-to-month with different designs by the student body.

For the month of February, Black History Month, the school's Student Equity Team and Black Student Alliance unanimously agreed to paint the rock with a mural of a raised Black fist and the words 'BLACK HISTORY' written on the side.

According to the school's principal, Robert Morrison, the symbol was meant to convey unity.

However, what reportedly came to follow is much different.

Parents sounded off on Facebook voicing their concern after learning several parents were upset with the painting, considering it synonymous with the Black Lives Matter movement.

"I think in this case it was really a matter of not being educated on what the symbol really means," said parent Chanel Wilkins. The Impact Holly Springs organizer said she understands how some can arrive at the decision that a raised fist and BLM go hand-in-hand. "We will not allow for people -- because it's uncomfortable -- they're not willing to even consider or educate themselves on something different. That's not going to happen anymore."

In an e-mail sent to parents Tuesday afternoon, Principal Morrison called the incident a "learning opportunity" and that he hopes the students' ideas are not misinterpreted or politicized.

District leaders said Morrison did not "initially agree to have the rock painted over, so there was no need to change his mind."

However, Wilkins disagreed and said she is "'confident" most parents understood Principal Morrison would have the rock painted over in response to feedback received from people opposed to the mural.

"I hope (Morrison) changed his mind because he became better educated. Not just because the clamoring of people," Wilkins said.

Other parents also reacted to the furor.

"Black lives do matter and have mattered and will continue to matter," said Mark Roberts.

And a parent of two who wanted to remain anonymous added: "Trying to cover up the problems with our racial history and not address them, is just stupid. We have race problems in this country, they need to be talked about."

ABC11 has learned that the spirit rock will be up for the remainder of Black History Month.

Below, you can read the full text of Principal Robert Morrison's letter to families:

Because I want to keep you informed, I would like to share information about an important and sensitive issue, one which can serve as a great learning opportunity for our community.

To commemorate Black History Month, our Holly Springs High School Student Equity Team and our Black Student Alliance worked together to determine a symbolic representation of unity to paint on our Spirit Rock.

Collectively, the team unanimously landed on painting a mural of a fist with the words "Black History" inscribed around the edges of the rock. The symbolic meaning of the mural is unity, which is what we strive for at Holly Springs High School.

This is a student-led and student-driven initiative. It is my hope that our students' perspectives and ideas are not misinterpreted or politicized. As our students continue to work to establish an all-inclusive environment respectful of all ethnicities, I celebrate and acknowledge their courageous efforts to bring our community together.

Please do not hesitate to contact me directly if you have any concerns around the symbolic unity fist painted on our Spirit Rock.

Thank you for your continued support of our school.