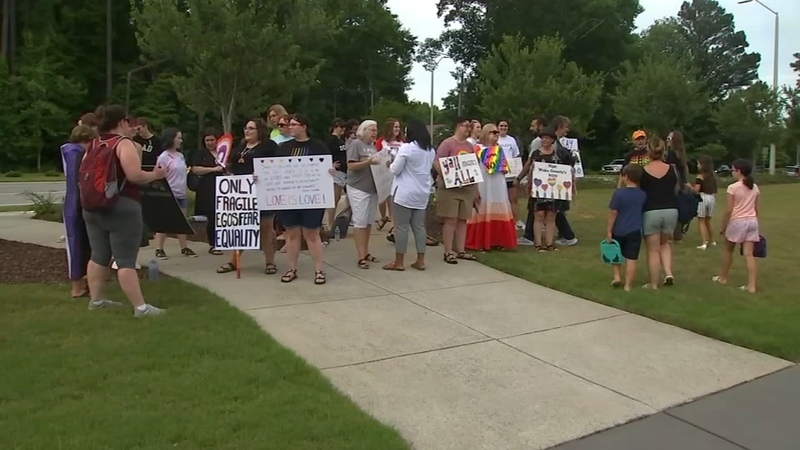 The topic for public comment was the non-discrimination ordinance that's become the talk of the town.

It was not on the agenda Tuesday but last week, the council decided not to sign on to the Wake County non-discrimination ordinance.

Advocates were also frustrated the town did not pass a proclamation for "Pride Month."

Back in @ToHollySprings tonight as folks speak during public comment about non discrimination ordinance that the town didn’t sign on to. No vote or talk of the NDO is on the agenda #abc11 pic.twitter.com/MNY6EHIeUX

"This is absurd," said Donna Friend, a Holly Springs resident. "People who preach love and acceptance have no tolerance for people like myself."

Donna spoke at the town council and has been vocal ever since the issue came to light.

"I think they let their true colors show," she said. "Sadly they've danced around the idea that this is not about homophobia and sadly we learned tonight that it really is. I've heard more Bible quotes than I have heard in church in the last six months."

Mayor Sean Mayesfkie said he wanted to stick by the comments that he made initially -- that he thought the diverse people and businesses said it all.

He did extend public comment Tuesday night so more people could have time to vent.

"I've read the NDO, it has serious problems not to be ignored for the sake of feeling good," said Darlene Agle. "It is not transparent about future costs."

Brian Norman, a pastor at Bethel Baptist Church, said he believes the ordinance is discriminatory to people like him.

Many brought signs and pride flags to the meeting.