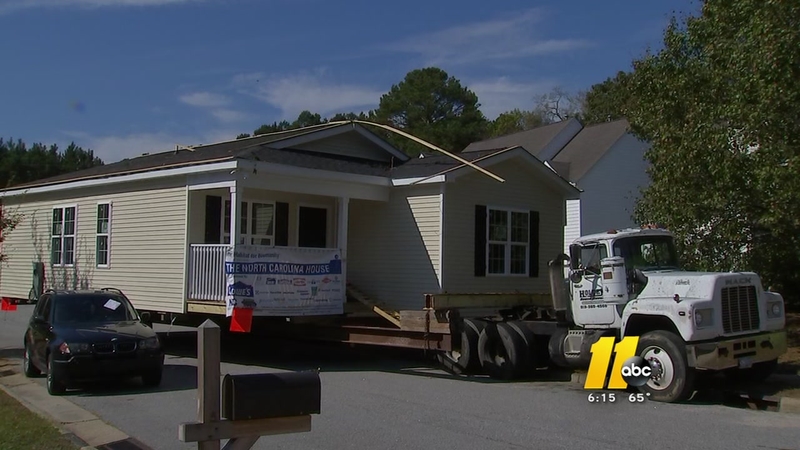 RALEIGH (WTVD) -- Habitat for Humanity of Wake County took on a new challenge with a house build and a house move.

Partnering with Lowe's Home Improvement and the North Carolina State Fair, Habitat Wake organized, for the first time ever, a house build on the fairgrounds. Then they coordinated moving the home to its permanent lot in the Neuse Ridge community in east Raleigh, not far from New Hope Road.

Movers with Holden Moving started moving the home at 7:30 a.m. Sunday. It took more than six hours to get it into its lot. They got the home through traffic lights, around mailboxes, parked cars, and tree limbs.

The homeowners-to-be are Anayo Offina, Chinyere Okafor, and their two little boys. The couple is originally from Nigeria. They moved to the United States in 2012 after winning a visa lottery.

Their older son, Chisimdi, was born with a congenital heart defect. He spent his first eight months at Duke University Hospital.

"That hospital saved our son's life," said Okafor. She explained that they wanted to give back and be part of the hospital, so her husband Anayo found a job working for Duke University Hospital.

Chisimdi is now five years old. He, his parents, and his two-year-old brother, Kosarachi, live in a two-bedroom apartment. They say it's expensive and in an unsafe neighborhood.

And we thought driving this was the hard part, now they have to get this on the lot! @HabitatWake #HouseMove #ABC11 pic.twitter.com/qQL0Uw9QWb

The home is still sitting on the trailer and will be transferred onto jacks so crews can lay the foundation underneath. They hope to finish up work on the house to have the family move in by the end of November.

It's in the lot! Over the next few weeks they'll work on foundation, etc to have family in late Nov! @HabitatWake pic.twitter.com/Q4S6UiXGnB