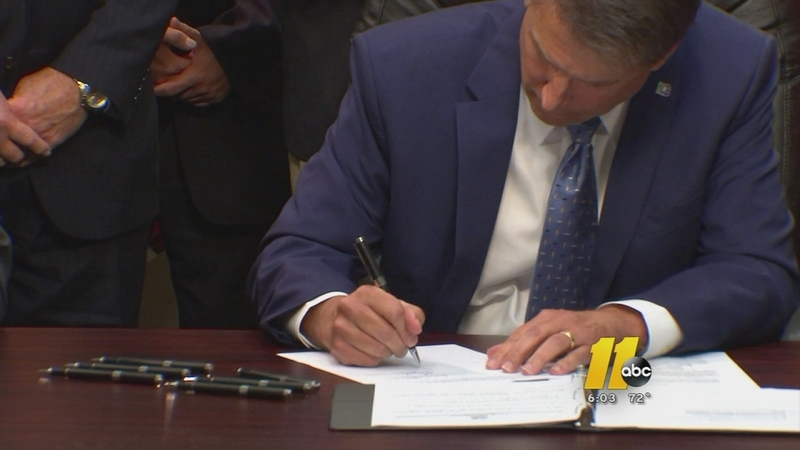 GREENSBORO, NC (WTVD) -- Wednesday afternoon at the Guilford County Sheriff's Department in Greensboro, Governor Pat McCrory put his gubernatorial plume to one of the last remaining bills left over from the past legislative session.
HB318 is a highly controversial law taking aim at immigration and food stamp benefits.

"We cannot allow our local officials in towns and cities to make up their own rules that conflict with our nation's laws and our nations values," said McCrory. "The concepts and policies of sanctuary cities is contrary to oath of all elected officials. No politician should select which laws to obey or not to obey and this includes immigration. Law enforcement officers should be helping enforce our immigration laws."

The new law also restricts the kind of identification cities can provide and immigrants can use. The law prohibits the Matricula Consular - a photo ID issued by the Mexican government to nationals outside the country.

Undocumented workers rely on the Matricula Consular for everything from doctor visits to school documentation and many worry, without it, they will be frozen out.

"We have cartels that are going up and down I-77, I-85, I-95, I-40," McCrory said, suggesting that undocumented workers are responsible for serious crimes around the state. "International cartels, gang violence, overcrowded schools, drugs, hospital emergency rooms, even the scourge of human trafficking and young women taken advantage of."

"We must follow the law and not tie the hands of the people behind me throughout this state," said McCrory, gesturing to the nearly two dozen sheriffs and police chiefs standing behind him.

"Many have tried to make this issue an emotional one, when in reality it's a legal one," said Guilford County Sheriff BJ Barnes.

That perspective couldn't strike a more different chord from the emotional outcry sent up by advocates for undocumented workers in Greensboro.

"It feeds into this idea that these people are somehow here to hurt our families and that the sheriffs are all here to protect us," said Addy Jeffrey, a community advocate in Greensboro.

Jeffrey described a recent phone call from an undocumented mother. "Her daughter had been raped and she was too scared to call the police because she was undocumented."

Greensboro immigration attorney Anne Marie Dooley shared a similar story about a mother she knows whose daughter was raped and wouldn't come forward for fear of being deported.

Advocates say examples like these show how the new law might not make the state a safer place, as promised by the Governor at Wednesday's bill signing.

The new law also targets people who are out of work and seeking an extension of federal food stamp benefits.

According to a spokesperson for McCrory, the law "restores federal requirement that able bodied adults work, seek training, or volunteer for 20 hours a week to maintain eligibility for food stamps."

The Governor called the changes "Welfare reforms that encourage able bodied people to get the necessary skills to become independent."

Critics see it as a restriction of benefits to those who are already struggling.