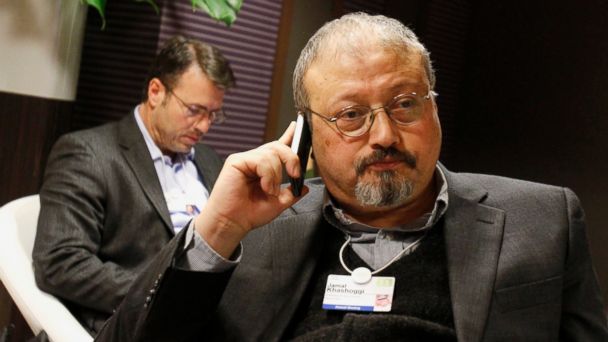 Several of the largest human rights organizations in the world are calling for a U.N. investigation into the killing of Saudi journalist Jamal Khashoggi.

The groups, including Amnesty International, the Committee to Protect Journalists, Human Rights Watch and Reporters Without Borders, called for Turkey to push the U.N. to begin an investigation into Khashoggi's death, which took place at the Saudi consulate in Istanbul on Oct. 2.

Khashoggi, a regular critic of the Saudi royal family, worked as a columnist for The Washington Post. He had been living in the United States after fleeing Saudi Arabia in September 2017.

Saudi Arabia's public prosecutor announced Friday that an initial investigation revealed that discussions between Khashoggi and the individuals who met with him at the consulate led to an argument and a fist fight -- which resulted in the journalist's death, according to the Saudi Press Agency.

Turkish officials have said 15 Saudi men flew to Turkey for the express interest of meeting Khashoggi at the consulate, where he was visiting to fill out paperwork for his impending marriage. His fiancee was waiting in a car outside the consulate at the time of his killing.

Saudi Arabia initially denied any involvement in the journalist's disappearance, before announcing the findings of the investigation Friday. The county said 18 people were detained in connection with Khashoggi's killing and several top officials were dismissed from their positions.

The handful of human rights organizations are calling for an independent investigation to avoid a "Saudi whitewash" of the facts.

"Turkey should enlist the UN to initiate a timely, credible, and transparent investigation," Robert Mahoney, deputy executive director of the Committee to Protect Journalists, said in a statement released by Amnesty International. "UN involvement is the best guarantee against a Saudi whitewash or attempts by other governments to sweep the issue under the carpet to preserve lucrative business ties with Riyadh."

There was no mention of President Donald Trump or the U.S. in the press release, though Trump seemed to accept denials from Saudi Crown Prince Muhammad bin Salman and King Salman earlier in the week.

He told reporters on Friday that he found the Saudi investigation "credible."

Trump also denied having any business ties to Saudi Arabia, though he actually bragged publicly about Saudis buying properties he owns at a rally in August 2015.

The president walked back some of the apparent willingness to believe the Saudi ruling family in an interview with The Washington Post late Saturday.

He told the Post there has been "deception" and "lies" by the Saudis.

A friend of Khashoggi described a much more brutal killing of Khashoggi than the official account given by Saudi Arabia.

"I talked with some Turkish government and security officials and they said Jamal was killed. I didn't know what to do. I really couldn't answer. Then I called a few colleagues, again security officials, trying to have them verify it, saying, 'Is this really true?'" his friend Turan Kislakci told ABC News on Wednesday. "They said, 'Yes, Turan, and let's tell you even beyond that, he was killed in a very barbaric way.' I was shocked. They not only kill him in the consulate, but also in a barbaric way."

Amnesty International cited the 2008 investigation into the murder of former Pakistani Prime Minister Benazir Bhutto as setting precedent for the U.N. to get involved in the Khashoggi killing.

"An investigation into Khashoggi's enforced disappearance and possible murder should start promptly and be thorough, impartial, and independent," Amnesty International wrote. "UN Secretary-General [António] Guterres should appoint a senior criminal investigator with extensive experience in international investigations to head the team. Once the investigation is concluded, the secretary-general should issue a public report on the overall findings along with his recommendations for following up."

The U.N. said Guterres was "deeply troubled" by the journalist's killing in a statement issued by a spokesman Friday, but did not commit to an investigation specifically by the U.N.

"The Secretary-General is deeply troubled by the confirmation of the death of Jamal Khashoggi. He extends his condolences to Mr. Khashoggi's family and friends," Stephane Dujarric, spokesman for the secretary-general, said. "The Secretary-General stresses the need for a prompt, thorough and transparent investigation into the circumstances of Mr. Khashoggi's death and full accountability for those responsible."