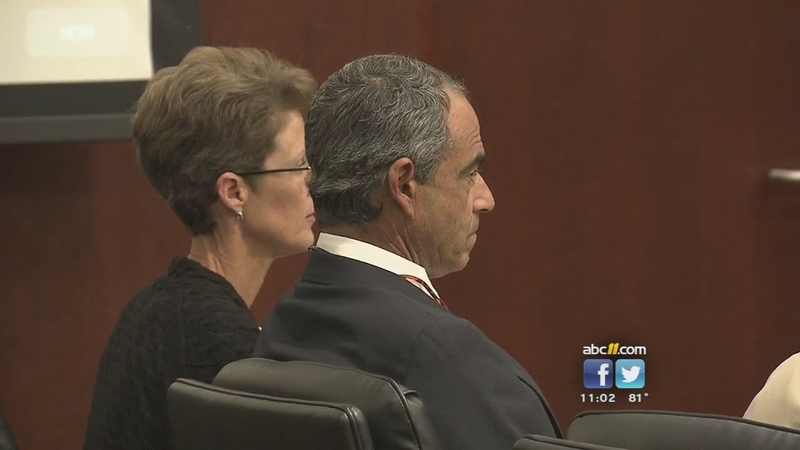 RALEIGH (WTVD) -- The lawyer for two Raleigh parents on trial for allegedly aiding underage guests to drink at a 2014 wedding reception shortly before a teen died in a crash moved for a mistrial Wednesday when prosecutors inadvertently flashed a photo of the crash scene on a screen in the courtroom.

The photo showed the dead body of 18-year-old Johnathan Taylor - the son of a state trooper. He had just left the wedding reception at the home of prominent Raleigh physician Charles Matthews, 59, and his wife Kim, 52, when his car slammed into a tree on Hunting Ridge Road near his North Raleigh home on June 28, 2014.

"It was a frightening and disturbing photo that drew a reaction from the audience," said attorney Hart Miles. "You can't unring that bell."

When the picture flashed on the screen, Taylor's mother was heard to gasp.

Prosecutors said showing the photo was an honest mistake. Judge Osmond Smith polled the 14 members of the jury and they said they could disregard the picture. He then denied the motion for mistrial.

Also Wednesday, a wedding caterer took the witness stand and testified he could tell a group of teens was drunk the evening before the crash

Joshua Weaver said he saw one of the girls fall down, but he said he didn't see any adults having intoxication issues at the reception and when asked if he was concerned his bartenders were serving alcohol to underage guests he replied ""No, because they know the state law."

The Matthews are charged with four counts of aiding and abetting underage possession and consumption of alcohol. On Monday, their son Thomas - who invited Taylor and two girls to the reception as his guests - pleaded guilty to underage purchase of alcohol in connection with the crash.

Before the reception, the teens drove together to the Cameron Village ABC store to buy a bottle of Jack Daniels whiskey. None was of legal age to purchase alcohol, but the clerk allegedly sold a bottle to Matthews without asking how old he was or checking an ID for proof of age.

The teens drank the entire bottle before the reception and then allegedly continued to drink wine once they got there.

Ravenscroft High School teacher Sharon Beineke was at the reception and also testified Wednesday. She said she saw the teens sitting with wine glasses at a table.

"Well, this is awkward," she recalled saying.

"You can't do anything. We've graduated," Beineke said one of the teens told her.

Prosecutors allege the teens were drinking in plain sight of the Matthews, but the attorney for the couple said in his opening statement that they never gave permission for the teens to drink.

"You're not going to hear any evidence that they gave permission," said Hart Miles.

On the witness stand Wednesday, wedding photographer William Lawrence testified he took pictures that show the teens openly drinking near the Matthews.

Lawrence also said it was obvious they were drunk.

"Please don't tell anybody," he testified one of them said to him.

Miles has tried to have the charges against the couple thrown out because he said the Wake County District Attorney's Office could have prosecuted others who provided alcohol to the teen but did not.

The DA's office did prosecute the clerk at the Cameron Village ABC, but the caterer and his bartenders at the reception were not prosecuted.

The judge said the Matthews have not proven they are being selectively prosecuted and ordered that their trial begin.

Earlier this month, Taylor's parents filed a civil lawsuit under a law that makes businesses that serve and sell alcohol liable for injuries caused when someone underage is served or an adult is overserved.

The Matthews were later added to the civil suit.