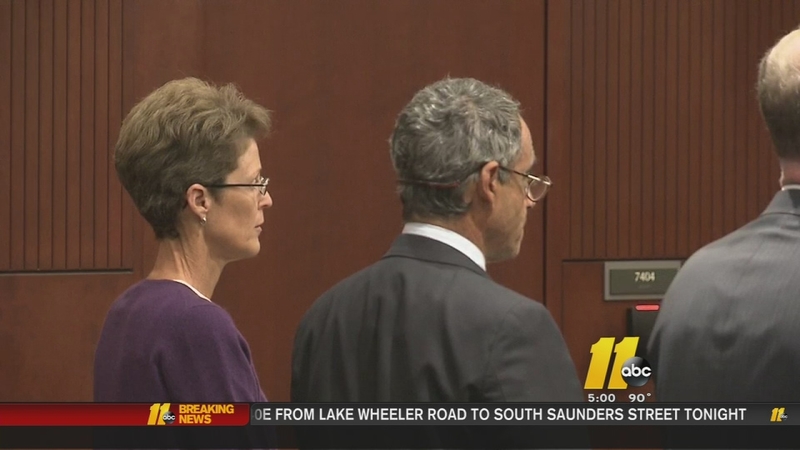 RALEIGH (WTVD) -- Thomas Matthews was sentenced Friday moments after a jury found his parents, who were accused of aiding and abetting underage drinking at a 2014 wedding reception before a teen died in a Raleigh crash, not guilty of all charges following a week-long trial.

During closing arguments Thursday, Prosecutor Jason Waller said Taylor, Thomas Matthews, and their friends were not hiding the fact that they were drinking at the reception, and that prominent Raleigh physician Charles Matthews, 59, and his wife Kim, 52, were "knowingly" providing alcohol.

The couple was charged with four counts of aiding and abetting underage possession and consumption of alcohol. Raleigh Police Department RPD Sgt. Sean Hoolan, who was the lead investigator in the case, told jurors Thursday he charged the couple after evidence showed four teens got drunk at the wedding party they threw at their multi-million dollar Raleigh home.

On Friday, Judge Osmond Smith sentenced their son, who is now a college student out of state, to 45 days in the Wake County jail, but it was suspended in lieu of 18 months of unsupervised probation, which will be until he is 21 years old. The judge also ordered him to surrender his license.

Thomas must complete 40 hours of community service within 6 months as part of his sentence.

On Monday, Thomas - who invited Taylor and two girls to the reception as his guests - pleaded guilty to underage purchase of alcohol in connection with the fatal crash.

Authorities have said before the 2014 wedding reception, the teens drove together to the Cameron Village ABC store to buy a bottle of Jack Daniels whiskey. None was of legal age to purchase alcohol, but the clerk allegedly sold a bottle to Matthews without asking how old he was or checking an ID for proof of age.

The teens drank the entire bottle before the reception and then allegedly continued to drink wine once they got there.

Taylor's blood alcohol-level was two-and-a-half times the legal limit at the time of the crash.

Defense attorney Hart Miles had repeatedly tried to have the charges against the Matthews dismissed - pointing out the caterer and bartenders who served alcohol at the reception and others involved were not charged or had charges dropped.

On Wednesday, the defense moved for a mistrial when prosecutors inadvertently flashed a photo of the crash scene on a screen in the courtroom that included the teen's dead body.

"It was a frightening and disturbing photo that drew a reaction from the audience," said attorney Hart Miles. "You can't unring that bell."

An audible gasp from Taylor's mother was heard when the picture appeared on the screen.

Prosecutors said showing the photo was an honest mistake. Judge Osmond Smith polled the 14 members of the jury and they said they could disregard the picture. He then denied the motion for mistrial.

Before the jury's verdict Friday, the jurors reviewed evidence in court. They appeared very attentive, some even taking notes, as they looked closely at wedding pictures with time stamps, the event layout,and examined text messages to and from Taylor.

Earlier this month, Taylor's parents filed a civil lawsuit under a law that makes businesses that serve and sell alcohol liable for injuries caused when someone underage is served or an adult is over-served. The Matthews were later added to the civil suit.

The couple told the judge Thursday that it was their decision not to testify during the trial.