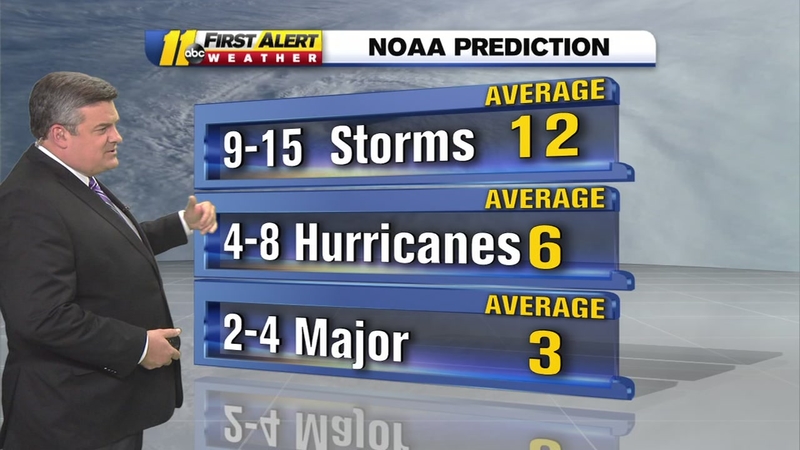 RALEIGH (WTVD) -- The 2019 hurricane season in the Atlantic Ocean starts June 1, and now we have an idea of how many major hurricanes forecasters are expecting this year.

On Thursday, the National Oceanic and Atmospheric Administration (NOAA) released its outlook, predicting a near-normal season with a 70 percent chance of nine to 15 named storms, which have sustained winds at least 39 mph.

Of those, four to eight will become hurricanes and two to four will reach major hurricane status of Category 3, 4 or 5.

The Hurricane Outlook just issued from @NOAA for 2019. #hurricane pic.twitter.com/mDOMqfPlAc

NOAA said to keep in mind this outlook does not suggest how many of the storms will hit land.

Two of the worst storms, Michael and Florence, had their names retired.

Earlier this year, AccuWeather released its own prediction calling for 12-14 storms, five to seven hurricanes and two to four major hurricanes.

Regardless of what forms, everyone living in the Atlantic hurricane basin, especially on the coasts, should have a hurricane plan in place.

SEE ALSO: Get more tips on what do to before hurricane season starts

Hurricane season 2019: How storms are named, what's coming this year

What you need to do in the event of a hurricane
Report a correction or typo
Related topics:
weatherncweatherhurricanesevere weather
Copyright © 2022 WTVD-TV. All Rights Reserved.
TOP STORIES
Winter storm moves out, refreeze possible overnight
NCSHP reports 200 crashes statewide, urges drivers to stay home
Dozens of RDU flights canceled through Monday evening
Monday events canceled, postponed due to winter weather
Why do we get freezing rain instead of snow or sleet?
FBI identifies hostage-taker at Texas synagogue
How to drive on snow, ice and get out of a skid
Show More
Expect more worrisome COVID variants after omicron, scientists say
After Biden's first year, the virus and disunity rage on
Novak Djokovic leaves Australia after court rejects visa challenge
Ukraine claims Russia behind cyberattack in 'hybrid war'
Hostages in N. Texas synagogue 'out alive and safe,' Gov. Abbott says
More TOP STORIES News