'I'll never get over this': John Forslund on life after Canes 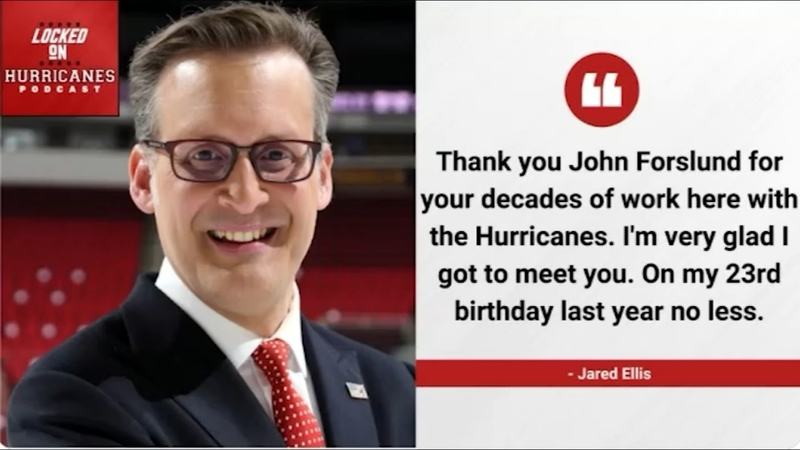 'I'll never get over this': Forslund on life after Canes'

RALEIGH, N.C. (WTVD) -- John Forslund loved everything about being the voice of the Hurricanes.

Forslund's impact is reflected in people like Jared Ellis.

Ellis now blogs and runs a podcast about the Canes, inspired in part by a meeting with Forslund. It was during a tough patch in his life.

"I'm not doing anything. I'm trying and I'm going nowhere. And then, you know, meeting Forslund and all the other people that I've met, I really want to go for this." Ellis said.

It's those kinds of stories that Forslund cherishes most.

"The inner beauty of my connection and my role with the team is meeting people like Jared and others who love the team but also just want to make a connection," he said. "You use the word inspiration, again, I'm taken aback by that."

For the past 29 years, Hartford and Hurricanes hockey has dictated the tempo of his life. With that now taken away, uncertainty looms about the next chapter in his life. He's got no landing spot as yet.

There are potential opportunities in Tampa and Seattle and very likely with NBC, too. In his heart though, John is a team broadcaster.

"When you connect with one singular fan base, there is an energy that you gain from that as a pro," he said. "That helps you get through it and helps you do a good job. My heart and soul's with the Carolina Hurricanes, it always has been."

Forslund said he'd never heard from the Canes front office after contract talks broke down, not even just on a personal level. He and his family have come to terms with the situation but that doesn't make it any easier.