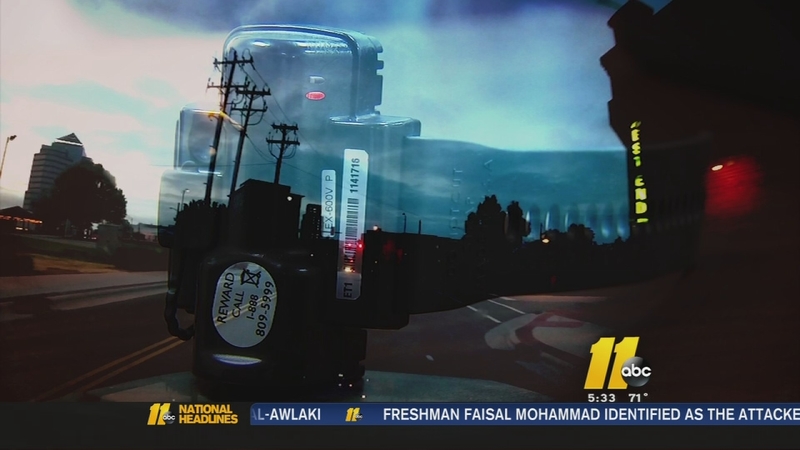 RALEIGH (WTVD) -- Thousands of people across North Carolina are under orders to wear ankle monitors. They are part of an electronic surveillance program tracking various kinds of criminals. Some are waiting to go on trial. Others are on parole or probation just out of prison. Many are sex offenders.

We went on patrol with parole officer David Reid.

Parole officers like David Reid use monitors to keep tabs on offenders.

"I'm going out to do a monthly check on an ankle bracelet and equipment to make sure it is functioning properly," Reid told us.

It's his job to track convicts wearing ankle monitors after they've done their time in prison for crimes ranging from drug possession to murder.

On this day, he visited a sex offender.

"We're going to check your bracelet here and make sure everything's good," he told the man.

But, Reid acknowledges a limitation with the surveillance program. He knows where the convicts are but not what they're doing.

"The ankle bracelet is just there to help us with supervision. It don't deter anybody from going out and committing a crime," he told us.

Authorities say that's exactly what happened in a family neighborhood in Chapel Hill in July of last year.

UNC professor Feng Liu was allegedly murdered by Troy Arrington and another man. The I-Team learned Arrington was wearing an electronic ankle monitor assigned to him by a Durham judge as he waited to go on trial on larceny and burglary charges.

Liu moved to Chapel Hill in 2005. He was working on a cure for cancer at the UNC pharmacy school. Andrew Satterlee worked with him.

"He was a huge part of our lab. The kinds of work he did that maybe I took for granted while he was with us, but now that he's gone, there's such a hole left,"
Satterlee said.

The I-Team found that in Arrington's pre-trial release court documents a judge granted him $5,000 bail and ordered ankle monitoring. He was on house arrest between 7 p.m. and 7 a.m., but he could go out during the day.

The I-Team wanted to see how electronic ankle monitors work, so we tested the program with a department of public safety employee.

First, we set-up a perimeter zone on the GPS system that the employee was 'not' allowed to cross.

A perimeter zone is set up using GPS technology.

Within minutes, we saw on the computer he wandered into the zone. An e-mail alert was sent two minutes later.

While the program tracks the steps an offender takes in real time, it does not see if a crime is being committed.

"You hope they come to the next court date. You hope they don't have contact with a victim or go to a specific place," she said.

Jim Woodall is prosecuting the Liu murder case and says the decision to assign an electronic monitor is a tough one.

"There's not a silver bullet," he explained. "It's judgment calls by people in positions like my position: judges, probation officers, people who work in pretrial release programs. I think most of those people try to make the best judgments they can."

While parole officers like David Reid are keeping an eye on convicts, people in the justice system acknowledge the monitoring program has its shortcomings.

But, that's little comfort to people like Andrew Satterlee who have lost someone to a violent crime.

GOT A TIP FOR THE ITEAM? EMAIL: iteam@abc11.com