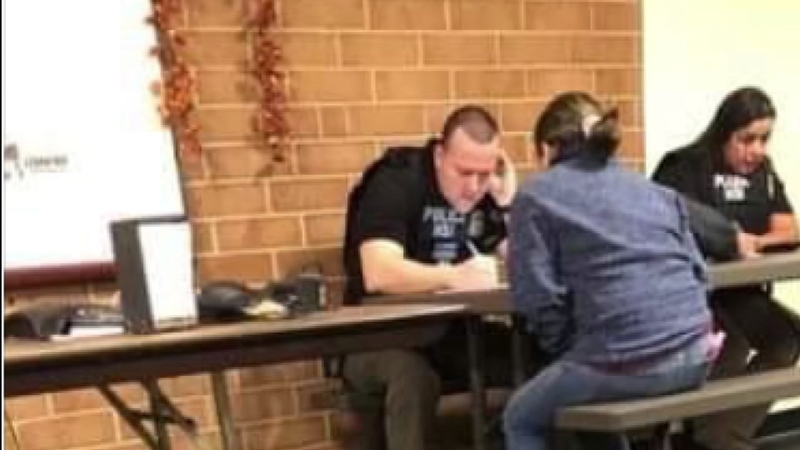 30 people taken into custody by ICE

SANFORD, N.C. (WTVD) -- Approximately 30 people were taken into custody by U.S. Immigration and Customs Enforcement at a manufacturing company in Sanford on Tuesday morning.

It happened at Bear Creek Arsenal.

The Lee County Sheriff's Office said it was the result of an ongoing investigation by ICE into identity theft and fraud. An ICE official told ABC11 that action was the result of a federal search warrant and not immigration enforcement.

ICE clarified Wednesday that 25 people had been arrested on criminal charges related to "an ongoing criminal investigation." Two other individuals were arrested for civil immigration violations.

.@ICEgov confirms they executed a search warrant this morning at Bear Creek Arsenal in Sanford. They are calling it “an ongoing investigation.” @ABC11_WTVD pic.twitter.com/Xyh6daCOvo

"My godmother was here," an 18-year-old man told ABC11. He drove over after he learned about the raid from his godfather.

"He was like, 'yeah they took her and what they were doing is taking people to the breakroom, and if you didn't have valid ID, they were taking them out,'" he said.

Statement from Bear Creek Arsenal in Sanford about @ICEgov investigation at their facility today. More details on the case coming up at 4:30 and 6 on @ABC11_WTVD pic.twitter.com/RFDuqPqmG9

His godmother was one of the people taken into custody. He said they came from Mexico about 12 years ago and she has worked at the plant for about a year.

He also said the couple has a young daughter.

"I knew it was going to happen at some point. I knew they were going state-by-state, but I didn't think they'd come here. But anything can happen," he said.

Bear Creek Arsenal said it is cooperating and added that "Homeland Security has confirmed that our Human Resource Department had complied with all laws, rules, and regulations in our hiring practices."

It's also unclear how long the people who were detained will be held.

The raid spurred immigrants-rights groups to come over and offer their assistance.

"A lot of sadness obviously," said Hispanic Liaison of Chatham County Executive Director Ilana Dubester. "This is always a tragic event when ICE comes to town and conducts a raid and separates family and arrests people and everybody's scrambling and they don't know where their family members are being taken."

ICE sent the following statement to ABC11: ICE's Homeland Security Investigations executed a search warrant this morning at Bear Creek Arsenal in Sanford, North Carolina. This is an ongoing investigation, and further details are not available at this time.