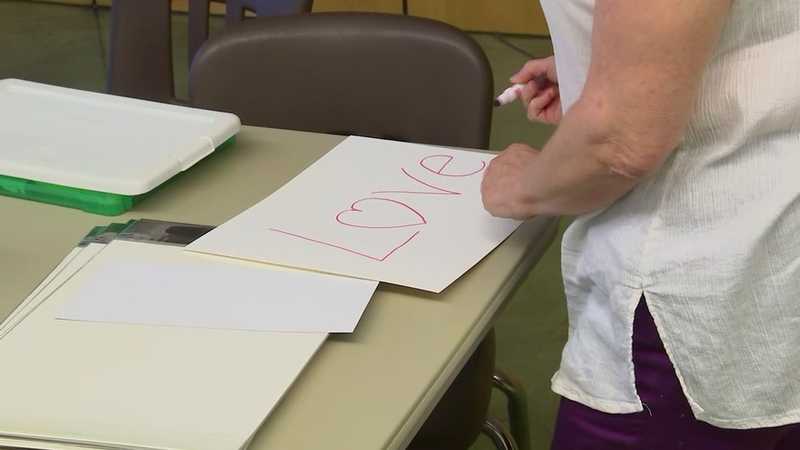 RALEIGH, N.C. (WTVD) -- Sixty people are leaving downtown Raleigh on Saturday morning to protest the conditions for undocumented migrants at ICE detention centers. They've chartered a bus not to take them to the U.S.-Mexico border, but to Farmville, Virginia, a small town 120 miles away, where ICE detainees are being held.

At Pullen Memorial Baptist Church on Friday night, several members of the group were making protest signs to take with them on their trip. It's being organized by the Poor People's Campaign, a national network of faith leaders and progressive activists.

The group will hold their signs, make speeches, and have a prayer vigil outside the ICE detention center in Farmville. They said they want to shed light on the trauma being felt by refugees and asylum seekers at the border and what they call the "immoral" conditions at ICE detention facilities.

They were making signs tonight in Raleigh for a trip to Farmville, VA, Saturday morning, for a protest and prayer vigil outside an #ICE detention facility. #abc11 pic.twitter.com/XxK9BO8S5C

"And if nothing else, we can bear witness to what is going on," Pullen Memorial pastor Nancy Petty said. "And we can show up with love and say that we believe the detention of people who are coming in to this country to seek refuge and seek safety is an immoral response to those people."

Back in Washington, the Trump administration unveiled a sweeping expansion of deportation powers this week.

Currently, authorities can only exercise such powers within 100 miles of the border and only target people who have been here less than two weeks.

The new rules are sending chills through undocumented immigrant communities. Some lawyers are advising migrants to gather up pay stubs, apartment leases, as much documentation as possible -- to prove they've been in the U.S.

For the protesters in Raleigh, that has added even more fuel for their fight.