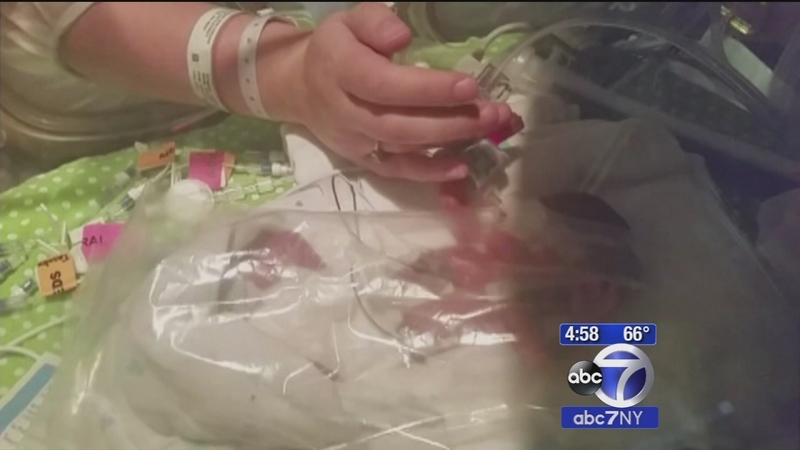 Twins separated at birth; one still in the mother's womb

KIRKLAND, Wash. -- A delayed delivery of twins is already a rarity, but for one Seattle-area mother, her case is even more unusual.

Baby Link was born at just 1 pound, 2 ounces -- 23 weeks into his mother's pregnancy and on the cusp of viability.

The tiny baby is an identical twin, and doctors originally expected to have both newborns in the NICU at Evergreen Medical Center. But instead, his brother Logan is still in their mother's womb.

"It's very surreal," mother Holli Gorveatt said. "And to be post partum and partum."

According to his mother, Logan appears to be in good health.

"Logan's good, so he's growing a lot and he's just kicking, he's got fluid, he can move around," she said. "He was stuck before, so no contractions."

"So you have a situation where one baby becomes anemic and weak from blood loss, and the other baby becomes over-stuffed with blood, bloated and goes into heart failure," Dr. Walker said.

Dr. Walker was able to perform surgery, in utero, by separating the babies' blood vessels. The procedure wound up saving their lives -- twice.

First, it solved the blood flow problem. Then, when Gorveatt went into early labor a week later, the separation of the babies meant Link could be born and Logan could stay inside.

"So far so good," Dr. Walker said. "She remains pregnant just about a week and a half since that procedure. It's a real big week and a half for that baby that's in there. During that time the baby has grown, looks healthy."

Link is so fragile that his parents can't hold him. But they can be with him, celebrating his September birth while waiting for what they hope will be his twin brother's January birthday.