If a food delivery driver hits your car, who pays? The answer: It's complicated

WTVD
By Diane Wilson and Isabella Seman
Food delivery services are more popular than ever during the COVID-19 pandemic, but when one of their drivers causes damage to a property, who is responsible for covering it? It's an issue two different ABC11 viewers faced when they were left with thousands of dollars in damages.

Carlyle White's brick retaining wall at his Durham home got damaged after he says a Grubhub driver hit it while attempting to deliver food at his home that his neighbor ordered.

"It is sizeable damage. The guy simply floored it and took off up the driveway and through the yard there and kept going," White said.

Why stimulus checks may appear to impact your tax refund

White contacted Grubhub to report the incident, but he says that got him nowhere.

"Finally the last person I got through to said they take no responsibility for any damage done by their drivers, their drivers are required to have liability insurance there was nothing he could do," he said.

It was a similar frustration for Chapel Hill resident Kristen Polzien after a driver for DoorDash hit her car. 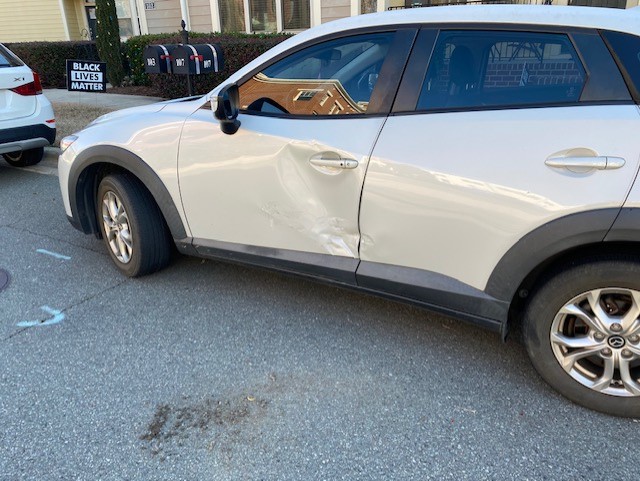 "He hit it so hard that it sent the front end forward and the backend backwards towards the curb," she said.

That driver also took off. Kristen then got the police involved.

"We actually had to get a court order in order for DoorDash to release the driver information," Polzien said.

Police did charge the driver with hit and run, but in this case, while the driver did have insurance, Polzien says the claim was denied by the driver's insurance company since he didn't have commercial insurance.

Troubleshooter Diane Wilson contacted DoorDash who told her they do have a commercial insurance policy that covers up to $1 million in damages, but it's when drivers are on active delivery.

In this case, the driver just delivered the food, so DoorDash's third-party insurance company denied the claim.

"That's a loophole that door dash has in their policy," Polzien said.

The more than $5,000 worth of damages to Polzien's car, now has to be covered by her insurance.

"I'm stuck paying the $500 deductible and the unknown if my insurance premium will go up," Polzien said.

When it comes to White's case, once we got involved and contacted GrubHub, they did reach out to White.

"Within 24 hours of you sending those emails, it got bumped up the chain, they were very cooperative. Grubhub now agreeing to take care of the damages to White's retaining wall," he said.

A spokesperson for Grubhub provided this statement: "It's our priority to bring the best experience to everyone who comes into contact with our brand, and the vast majority of our orders are completed without incident or complaint. When things don't go as planned, we work hard to make things right. We require all delivery partners to maintain insurance and have zero-tolerance for misconduct, including performing deliveries in an unsafe manner. We've terminated the contract of the driver included in this incident. We've been working with local officials to provide them with the information they've requested and have spoken with Mr. White to communicate the steps we've taken to remedy this situation and ensure the damage gets repaired."

Grubhub sent White the money to repair his wall, and he says he's satisfied with the resolution.

"I thank you for your involvement. I don't think I would have gotten anywhere I am without it because they refused to talk to me," he told the Troubleshooter.

Not all policies are created equal when it comes to meal delivery services and how they cover damages. The best advice is to document everything, take pictures and video so you have the proof, and contact the company as soon as the damage happens.
Report a correction or typo
Related topics:
nccar crashabc11 troubleshootermeal deliveryfooddelivery service
Copyright © 2021 WTVD-TV. All Rights Reserved.
More Videos
From CNN Newsource affiliates
TOP STORIES