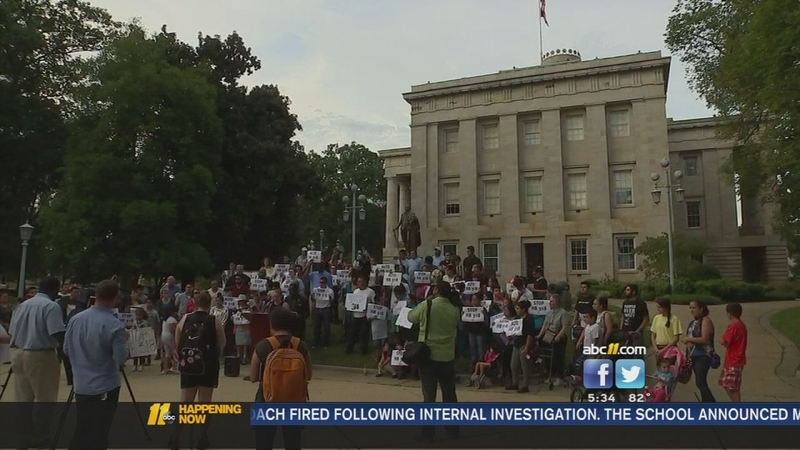 RALEIGH -- A bill that would prohibit communities from becoming so-called sanctuaries for people in the country illegally and that would limit the types of acceptable personal identification will cause distrust between police and the communities they serve, progressive and immigrant groups said.

A large group showed up in Raleigh on Wednesday to urge Gov. McCrory to veto the bill. With the legislation one step from becoming law, they are running out of time.

Nayely Perez-Huerta, regional organizer for the Southeast Immigrant Rights Network, spoke of Pope Francis' words last week when he visited the U.S. and called on lawmakers, she said, "to ensure the well-being of all society, especially those who are most vulnerable."

North Carolina is doing exactly the opposite, she said. "It is shameful that legislators are emulating the states like Arizona and Alabama that have enacted legislation that criminalizes and racially profiles immigrants," she said.

The state Senate gave its final approval to the measure Monday night as the legislature seeks to wrap up this year's protracted session later this week. The significantly changed bill returns to the House, where it originated as a measure to increase the number of employers who must participate in the federal E-Verify program.

The Rev. William Barber, president of the state chapter of the NAACP, said the bill's provisions would drive wedges between police and communities, making people less safe. While the bill is titled "Protect North Carolina Workers Act," in reality, it is race-baiting, he said.

The Burlington Police Department supports the intent of parts of the bill, but other sections would "place limitations on the ability of our police department to interact with residents within the city," Capt. Chad Slaughter said.

"If we limit the forms of identification that police can accept, the number of regular citizens who are booked into jail for prints and pictures will increase," he said. This would take up valuable staff time and "create inequities in enforcement practices," he said.

Some cities and nonprofit groups have created photo identification cards for some immigrants. The bill would make the use of these documents and some IDs created by foreign governments unacceptable for determining someone's identity or residency, or for obtaining insurance and certain government services.

"What about schools? What about pharmacies? What about other places where you have to show ID, if it's invalidated, then what are people left with?" asked Iliana Santillan, who is against the bill.

Sen. Gladys Robinson, D-Guilford, proposed an amendment that would have removed the ID provision from the measure. Robinson said police chiefs use the IDs to improve relations with law-abiding individuals in their communities.

"However well-intentioned this provision is, it's actually going to undermine all of our safety," said Sen. Josh Stein, D-Wake. But Sen. Norm Sanderson, R-Pamlico, who is shepherding the bill in the Senate, said it's unclear what standards are being used in creating these non-official cards to determine the person's identity.

The bill, Sanderson said, would "make sure that when forms of ID are being used that they meet certain criteria." The amendment failed. The full measure then passed 28-17.

During debate late last week before an initial vote, senators focused on the provision in the measure that would prevent cities from instructing law enforcement or other officials not to ask the immigration status of people with whom they come into contact.

Some municipalities - Durham, Chapel Hill and Carrboro among them - have approved such policies, which makes them "sanctuary cities," in the eyes of bill supporters, who say city officials shouldn't ignore immigrants who are in the country unlawfully.

Critics of the bill also don't like a provision that would stop the Department of Health and Human Services from seeking waivers to extend a three-month limit for food stamps for some able-bodied adults in high unemployment areas. A statewide waiver expires Oct. 1, but an amendment Monday night directed DHHS to seek to extend the waiver to March 1.

There wasn't much faith among the crowd on Wednesday that Gov. McCrory will veto the bill. They said he's not been friendly to immigrants in the past, so they're planning a sit-in as a way of speaking out.

"We're tired of sending emails, we're tired of calling him," Santillan said. "We filled up his voicemail in Spanish and English and nothing. He hasn't said anything. So at this point, we're like, what else can we do?"