What to look out for when using fast payment apps 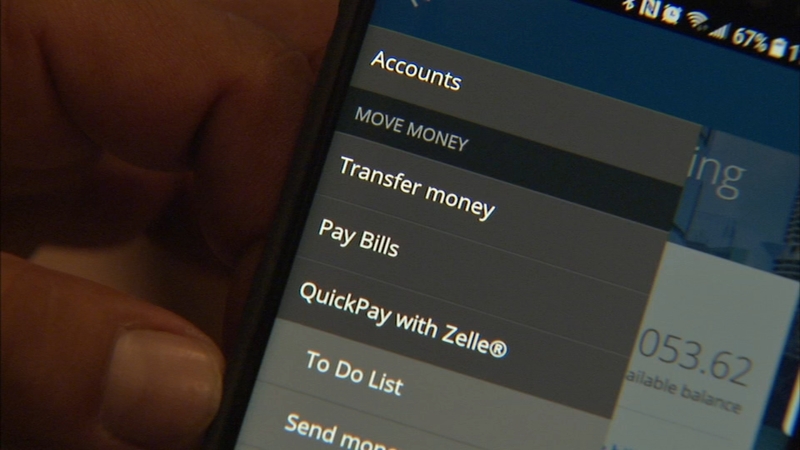 Fast peer-to-peer payment apps are replacing cash and checks to make it easier to pay friends, family and even some businesses.

However, there is little legal recourse if you send money to the wrong person using these apps, the I-Team has found.

Jason Knowles demonstrated how fast they are:

"All you have to do is put in the person's name and phone number and then I'm going to pick an amount right here, I hit done, I hit send money. That money is going to go just like that although Chase does warn you that you are not able to cancel it once you send."

"I kept telling them, 'Did you finally get it?' On my end, it says that you received it and they said, 'No, we haven't received anything.' I made a mistake of putting in a wrong number. Instead of 8244 I put 8224 and with that, that's it. I lost my money," Padilla said.

Padilla said he called the cell phone number that he transferred the money to, but the person didn't return his calls. Then he asked Chase Bank for help.

"They did a courtesy email and the person did not reply, so that's it," Padilla said.

The Chicago Police had him file a "non-criminal" report and told him that this isn't a crime, Padilla said.

Matt Rossetti, a consumer attorney at Sentient Law, said cashing a check that isn't yours is breaking the law.

"That is a federal offense. That's bank fraud," Rossetti said.

But the loophole is when the money goes directly into your bank account.

"When you electronically send money from your account to somebody else where they don't really have to certify or verify they are that person, it becomes an issue because there is really nothing criminally law enforcement or a prosecutor can do," said Brad Garret, an ABC news contributor and former FBI special agent.

Zelle is the company behind more than 25 banks e-payment systems, including Chase's QuickPay.

The I-Team asked them if there should be a verification by the recipient, like an electronic signature.

In a statement from Early Warning Services, the company that developed Zelle, stated:

"We want every consumer to have a positive experience sending and receiving money with Zelle. We're always listening, and continually applying feedback, to improve our service. Our priority is to ensure that the payment experience is easy and simple, and that payments arrive quickly to intended recipients.

We are working hard to address situations involving payments that are sent to unintended recipients. For example, we are introducing new features that include displaying the first name of the person with whom an email address or mobile phone number is associated and messages within the Zelle experience that remind senders to double check the mobile phone number or email address they are using to send the money and alert them that once the money is sent, it cannot be revoked. Some participating financial institutions have already added these features and both the Zelle mobile app and participating financial institutions will continue to add these type of alerts in the next few months to help the consumer confirm that they are sending money to the intended recipient.

We are continuously looking for opportunities to educate consumers on sending money safely, so we always advise consumers to do the following:

Double check to be sure you've entered the recipient's correct token - email address or mobile phone number - prior to sending a payment.
Remember: When you send money to an email address or mobile phone number that is already enrolled in Zelle, it's delivered typically within minutes. It's very important to enter the correct information since the payment cannot be canceled.
Zelle is intended to replace instances where cash and checks are being exchanged. Zelle does not offer protections for authorized purchases, such as those you may have with your credit and debit cards."

Chase Bank told the I-Team there will be a verification improvement in September. They added "We always work with a customer to try and recover their money. Consumers should always double check that they've typed in exactly the correct phone number or email. We then show them that information on their screen and remind them that the money cannot be retrieved once we send it. Our latest improvement, coming next month, makes it even easier."

Besides a civil suit against the person who received your money, there's nothing people can do if they accidentally sent money to the wrong account like Padilla did.

"There is definitely something in the system that needs to be fixed," Padilla said.

"It is a huge loophole where, in effect, we have not caught up with technology," Garrett said.

Experts suggest talking to the recipient of the payment, immediately before and seconds after electronically sending money, to make sure it's getting to the right person.

Or, send a small amount, like one dollar. Confirm that the intended recipient receives it before sending the full amount.

If you receive money through an app mistakenly, you can easily return it using the phone number of the sender, which shows up on your screen.

If you make a mistake, the sooner you report it, the better.

After the I-Team contacted Chase Bank, they gave Padilla $800 as a courtesy.

The I-Team also asked what the popular app Venmo does to help users avoid mistakes. In a statement, the company said:

"There are several controls Venmo has in place to help users avoid sending money to the wrong person, one of which is an automatic flag to a sender when we have reason to believe they might be transacting with the wrong user. The flag is based on information Venmo has that indicates the sender and recipient, both of whom must hold Venmo accounts, don't know each other. For example, we look at information such as whether the sender and recipient have previously transacted on Venmo and whether they are not and do not share any friends on Venmo.

* Venmo Codes: We introduced Venmo codes, so you can easily find the Venmo profile of the person you're trying to pay. You just open the Venmo app, pull up your own code, and let your friends scan it or if you're trying to pay someone, ask them to open the Venmo app and show you their code so you can scan it. You can also email, text or AirDrop (iOS only) your code to a friend.
Automatic Flags: Before completing a payment, Venmo automatically flags to a user if we think they might be sending money to the wrong person. We look at information such as if they're sending money to a person they've never paid before and whether they are not and do not share any friends on Venmo.
Profile images: Users have the capability to add profile pictures to accounts, so you can visually verify who the person is.
Verify: Always make sure to stop and read who the final payment is going to before tapping the button. The final verification button for sending money actually says the person's name such as, "Pay John Smith $10.00."

If you do send money to the wrong person you can:
Request Money: You should send that user a charge request for the same amount of the payment, so they can pay you back. We recommend including a note asking them to pay you back for the money you sent by mistake.
Support Team: Customers can always contact the support team and they can do their best to help and provide available options to request your money back."
Report a correction or typo
Related topics:
technologyiteambankmoneylost moneychase bankconsumer
Copyright © 2022 WLS-TV. All Rights Reserved.
ITEAM
Contact tracers' role changes as pandemic reaches new heights
Number of officer-involved shootings decreased in 2021
Trial over NC voting maps begins Monday
Local governments facing increase in staff vacancies
TOP STORIES
Snow possible this weekend but major impacts not expected
2 children hospitalized after car crashes into Chapel Hill playground
Fayetteville mother, daughter missing since 2016 found safe
North Carolina Zoo closes aviary after report of bird flu
RDU scrambles to resupply deicer after runway mishap during snow storm
LATEST: Wake County opens 11th drive-through testing site
Saturn's ice moon could support life
Show More
1 killed, 2 injured in overnight car crash
It's official: Supersonic jet startup Boom to land in North Carolina
Man denied heart transplant because he has not received COVID vaccine
Pedestrian killed on Highway 401 in Garner
Minority students, alum react to UNC Affirmative Action case
More TOP STORIES News