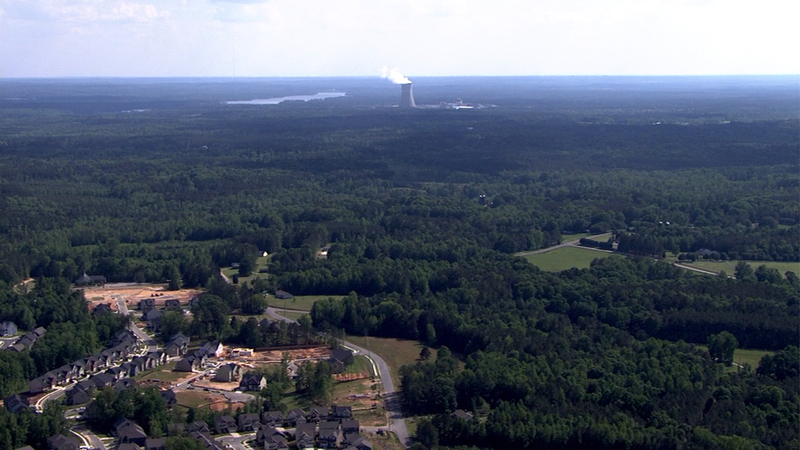 That's what parents living near the Harris Nuclear Plant want to know about their children's schools.

"I should always know where my child is," said Apex mother Shannon Robke. "No matter what the situation."

Robke lives in one of the many neighborhoods within the 10-mile Emergency Planning Zone around the Harris plant. It's located in New Hill, N.C. about 20 miles south of Raleigh. Like her neighbors, Robke has never been told by the school system what the plan would be if anything were to go wrong at the nuclear facility.

That's because in Wake County the plans are secret. A spokesperson for the school system emailed the reasoning:

"Apex Friendship High School does have an evacuation plan in place to respond to an emergency situation at Shearon Harris Power Plant. Wake County government oversees the emergency planning and response for those situations. Our part of the emergency response plan is outlined in the Wake County Public School System- Emergency Operations Plan. Since it contains sensitive safety information, it is not a public record. FEMA has reviewed and approved our emergency response plans."

"The safety of my child is my first concern and I do need to know where they are," said Robke.

Robke's neighbor, Chris Young remembers getting potassium iodide pills from the school system and county about 15 years ago and says she can't remember hearing from the schools since.

There are 23 schools from four districts in the 10-mile Emergency Planning Zone around the nuclear plant. The EPZ represents the area folks are most at risk of plume exposure in a disaster. The risk zone for ingestion exposure goes out to 50 miles.

And there have been problems at Harris. In 2013, cracks were found in the reactor vessel head. In 2006 and 2007, the plant was found to be among the worst in the nation for non-compliance.

Duke Energy has its own emergency evacuation plan for EPZ which includes schools. But while that plan is distributed throughout the four school systems and lives on the energy company's website, it's not sent to homes.

What's more, it's not Duke's responsibility to ensure schools follow the plans. A spokesperson for Duke says that, ultimately, falls on the state.

Parents say that's compounding their confusion about what to do in case of an emergency.

"If there are two separate plans, why are there?" asked Robke.

Apex Mother Mary Frarry said, "It's the not knowing if there's a plan, what the plan is, if they both have the same plan. It's disturbing."

A spokesperson for Duke, seeing our report, added some clarity that schools would not.

Cagle also said the energy giant includes its evacuation plan in a calendar the company sends to every home and business in the 10-mile EPZ.

"The brochures that go to schools at the beginning of the school year includes them too," Cagle said. "They are given to every student in every school in the EPZ."

But we didn't find one parent that remembered getting evacuation plans from their kids and schools won't - or, according to state law, can't - comment on whether Cagle's assertion that Duke's plan is their plan. That's left many parents confused and frustrated.

"I want to know how fast it takes my child to get to safety and where that safety is," said Robke. "If it's in one or two separate areas, at least tell me the separate areas, so if it's a game time decision to if they go to A or B, at least I know they're in one of the two areas."

A viewer pointed out the Chatham County website does outline evacuation procedures, including the plans for students attending a school within a 10-mile radius of Harris Nuclear Plant.

"If your child attends a school in the 10-mile Emergency Planning Zone, do not go to the school," the website states. "Children in these schools will be taken by bus to relocation schools. Moncure Elementary School will be relocated to Northwood High School.