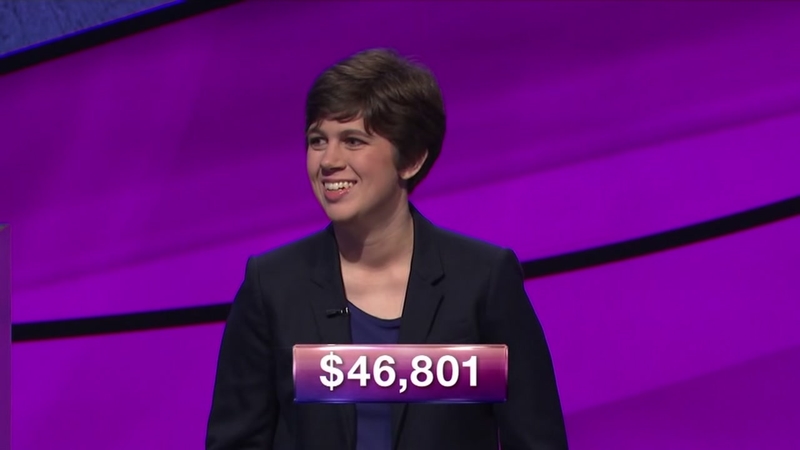 NAPERVILLE, Ill. (WTVD) -- Jeopardy champion James Holzhauer faced off against a librarian who earned her masters at the University of North Carolina.

Holzhauer's amazing streak ended at 33 games, and also short of the all-time consecutive Jeopardy earnings leader, Ken Jennings, by $58,000. He was bested by Emma Boettcher.

Boettcher is from just outside of Philadelphia, Pennsylvania. In 2016, she earned her masters degree from UNC's School of Information and Library Science.

Her 70-page thesis at UNC was about whether a computer could correctly predict a trivia question's difficulty using wording or question length. To research her paper, she painstakingly analyzed Jeopardy clues.

Boettcher is currently a User Experience Resident Librarian at the University of Chicago--and now one of the most famous librarians in the world.

"I don't necessarily like defining myself as someone that's defeated someone else, but to say that I've won a game of Jeopardy, no matter who against, is just incredible," Boettcher said.

After she beat Holzhauer, he rushed to her and gave her a high-five.

"One thing that makes me really happy is that I didn't beat myself," Holzhauer said after the show. "I lost to an elite player playing a near-perfect game."

At a watch party in Naperville, Illinois, though, his family remained proud of him.
"Emma played a great game. What a great player. I hope that she goes on and wins 33 games," said Ian Holzhauer, James' brother

Actual photo of James Holzhauer walking off stage at Jeopardy, his reign of destruction completed. pic.twitter.com/Xdf5PFR3QD