'I worry': Raleigh lawyer who delivered Watergate subpoena to Nixon fears US is making same mistakes 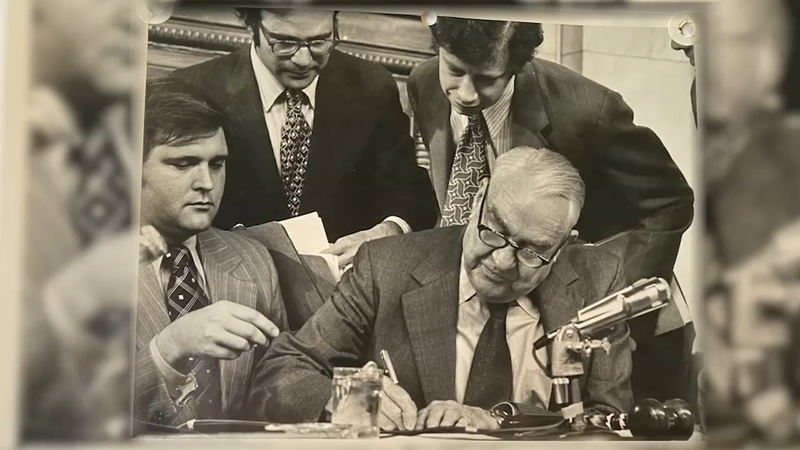 RALEIGH, N.C. (WTVD) -- Flipping through pages of newspaper clippings from the mid-1970s, Rufus Edmisten is instantly transported back to the moments that thrust him into the national spotlight.

"These are Watergate albums I've kept over the years. They are worn, but here's a picture of me and Senator Ervin," Edmisten recalled.

Edmisten was just 31 years old when he was tapped to be the deputy chief counsel to the Senate Watergate Committee.

Edmisten would go on to become North Carolina Attorney General and Secretary of State, but as the Watergate Scandal broke he was working in Washington D.C. with North Carolina Senator Sam Ervin.

His role led him to deliver the subpoena to President Richard Nixon seeking the tapes of secretly recorded White House conversations.

"That was the first time in history that an agency of the Congress decided to subpoena a president. I remember taking it down there that awful hot day, hordes of the press were following and I didn't realize until a couple of weeks later that that would sort of be a tiny footnote in history," Edmisten said.

Now it's a moment the Raleigh attorney looks back on often.

Friday will mark 50 years since the break-in at the Democratic National Headquarters that set forth a series of discoveries that would eventually take down President Nixon.

"Then came the uncovering of the shameful amounts of money they wasted on doing dirty tricks, on trying to cover up things by using the CIA, using the FBI. It was a governmental screw-up by all the people around Richard Nixon. And they did not want to obey the constitution which says that you shall preserve democracy by having government-wide open," Edmisten said.

While Watergate is still regarded as a top U.S. political scandal, its anniversary comes as U.S. leaders look deeper into a more recent threat to Democracy. This week the House select committee is holding the second week of hearings looking into the Jan. 6, 2021 insurrection at the Capitol and President Donald Trump's involvement.

For Edmisten, the latest investigation wreaks of similarities to the Watergate era.

"We must not repeat the mistakes of Watergate again," he said. "We've got to keep government open."

However, he said he's not sure we have avoided that.

"Look at the January 6 committee where people are ignoring subpoenas. We never had one single subpoena ignored during the Watergate hearings," Edmisten remembered. "People are saying that that President Biden didn't get elected and things like that. What do you do? Democracy is in danger when you don't have an informed citizenry."

He said people disobeying subpoenas now reveals the separation of powers is not working; something he and others thought had been fixed during Watergate.

"There's a breakdown. Congress doesn't do its job of completely using oversight over the executive branches of government. People disobey subpoenas. People think that their kind of constitutional law is the only kind and I worry," Edmisten said.

He also said the divide between the political parties has grown significantly since the 1970s. Edmisten credits the collaboration between Democrats and Republicans during the Watergate hearings that led to the outcome.

Today, he's not so sure the January 6 hearings will play out the same way.

"It was unanimous in every vote they took on the Senate Watergate Committee because they decided they would make it work, it wouldn't work today. I don't know whether the January 6 committee will be accepted or not because you have a committee that has two Republicans on it, but they are not liked by the Republican leadership," he said.

Edmisten said the growing influence of money in politics, partisanship and distrust of media and facts all cause him concern about where the country and democracy are headed.

"I think democracy will survive, but only if people stop and say, 'Well, maybe somebody else has a view that is sort of different from mine, but I will at least listen to him.' We don't do that today. That's a shame," Edmisten said.

As people reflect back on the last five decades since Watergate, Edmisten hopes at the very least people with different views take the time to listen to each other.

"Remember that people can get along if they have different views about things and it means number one, listening to the other side and that there are good people in government and we need to continue to put good people there and ask what they stand for before they go," he said.
Report a correction or typo
Related topics:
politicsraleighpolitical scandalscandalpoliticspresident donald trump
Copyright © 2022 WTVD-TV. All Rights Reserved.
TOP STORIES
LIVE UPDATE: Parade shooting leaves 6 dead, 30 hurt; man detained
Man struck by lightning near island off North Carolina
Is your home prepared for hurricane season?
Spotted lanternfly sighting confirmed in North Carolina
Wake County continues to scale down COVID-19 testing sites
Fireworks dazzle over Dix Park, downtown Raleigh for Fourth of July
Highland Park 4th of July parade shooting survivors speak out
Show More
Renters struggle to find apartments in hot housing market
Brittney Griner writes letter to Pres. Biden pleading for his help
2 police officers shot during July 4th festivities in Philadelphia
Highland Park parade shooting victims range in age from 8 to 85
Person of interest taken into custody after 6 killed in IL shooting
More TOP STORIES News