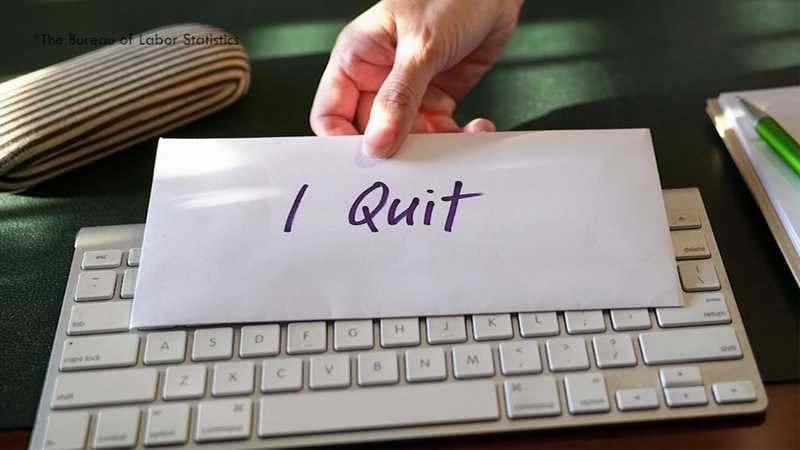 RALEIGH, N.C. (WTVD) -- The Bureau of Labor Statistics reports that4.3 million Americans quit their jobs in August, the continuation of a trend largely borne from circumstances caused by the COVID-19 pandemic.

"People know what's going on in the economy. They know that hiring is surging, They know that they have more options now. They're getting more and more calls from headhunters and recruiters bringing them opportunities that may be superior. And so, I think that given that, and also the fact that some have just decided that the time is right to try and improve their situation. Now they have options that they haven't had for a long time, I think it does embolden them and help them have the confidence to go ahead and take the leap and try to find a better situation," said Don Sharp, who serves as Vice President of Chemicals and Refining for MRI Raleigh, a recruiting firm.

In some instances, companies that laid off employees or froze hiring are now searching for help.

"We're definitely seeing a surge in recruiting activity. During the pandemic itself, the industry that I work in went through a big lull where it was pretty quiet for a long time. But over the last several months, we've seen a lot of companies get off the sidelines, and start to hire again. and that has the effect of providing a lot of options for job-seekers, who may have been sort of tentative about seeking a change but they may decide that now the time is right to take advantage of new opportunities that are out there," Sharp said.

While the quit rate increased in August, there was a net employment gain of 5.9 million hires in the 12-month stretch through August 2021, a sign that people leaving their jobs are not necessarily leaving the job market.

"Most of the candidates that I work with are passive, meaning that in many cases they're not actively looking to make a change when we first connect. But most people tend to keep an open mind about advancement opportunities," said Sharp.

That's the case for Alex Jones, who was working in a supervisory role at a coffee chain at the beginning of the pandemic.

"During the lockdown and all the changes that the pandemic had had, I could tell for customers but as well as myself and my team, it was very stressful," said Jones.

Jones said she was considering a career in digital design prior to the pandemic, though stress from the pandemic did speed up her timelines. She has utilized resources from Dress for Success, in helping her with her job search.

"(Dress for Success) has a networking group. As I got to through that process, I was able to figure out how to get connected and get into a job, and prepping for a role at a marketing agency or some type of experienced design role," said Jones.

She's currently in the interviewing phase and expressed excitement at switching career paths.

"I feel a lot of relief compared to when I had first jumped into deciding (to) start a job search and (changing) careers and industries. So it feels really refreshing and kind of invigorating," Jones explained.

Jones believes changes during the pandemic have made employers more understanding of wants and needs of employees.

"We realize that it's a person that's doing this work, or at least that's what I've found in terms of the conversations I've had and whatnot. So I do feel more empowered," said Jones.

The competitive job market has forced companies to take steps to attract and retain talent, such as increasing wages and benefits to allowing for remote work.

"There is real competition for talent right now, and candidates have choices. And so, in the past, whereas even in the case of experienced hires, they may have tended to approach it from more of selection of competing applicants, now they're competing with other companies for talent. So they will try to differentiate themselves and their benefits to try and paint a better picture and give a better option to the candidates who are thinking about making a move," Sharp said.
Report a correction or typo
Related topics:
careersraleighncemploymentjobs hiringcovid 19 pandemicjobsworkplace
Copyright © 2022 WTVD-TV. All Rights Reserved.
TOP STORIES
Man accused of killing 2 in Fayetteville dies
NY teen found dead in SC after 13 years; Sex offender charged
NC Primary Election: What to know before you vote
NC Board of Elections provides update on primary election day
Durham voters turnout on Primary Election day
FDA authorizes Pfizer COVID-19 booster shots for children ages 5 to 11
Amber Heard cross-examined about fights with Johnny Depp
Show More
Pedestrian struck and killed on Cumberland Road in Fayetteville
Congress dives into UFOs, but no signs of extraterrestrials
You can now order 3rd round of free at-home COVID-19 tests
In Buffalo, Biden mourns victims, says 'evil will not win'
Inmate caught after escaping Orange County prison in Hillsborough
More TOP STORIES News