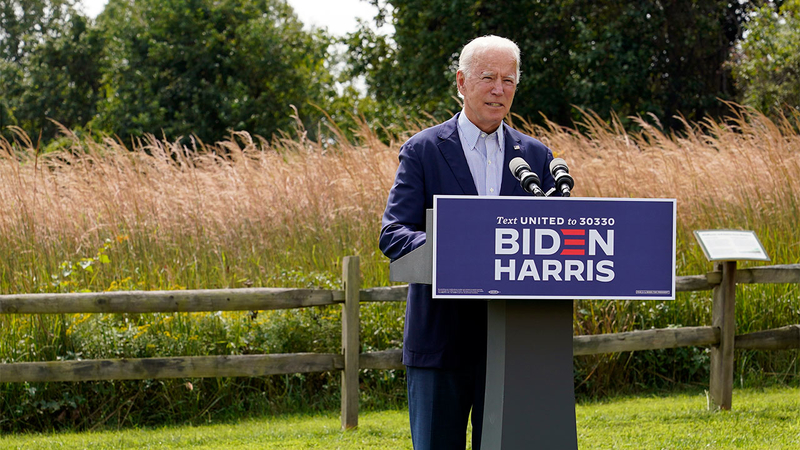 Speaking in Wilmington, Delaware, on Monday, Biden said Trump's "climate denial may not have caused these fires and hurricanes." But he says Trump's response had exacerbated it.

In his speech, the Democratic presidential nominee sought to emphasize that the effects of climate change have wide-reaching consequences. He pointed not just to wildfires in the West and hurricanes along the Gulf Coast, but also to droughts affecting farmers in the Midwest and even climate-related threats to U.S. military installations around the world.

The president will travel to McClellan Park in Sacramento County to be briefed on the devastating wildfires in California.

Biden said, "Hurricanes don't swerve to avoid red states or blue states. Wildfires don't skip towns that voted a certain way. The impacts of climate change don't pick and choose. That's because it's not a partisan phenomenon. It's science."

"This is another crisis he won't take responsibility for," the former vice president added. "If you give a climate denier four more years in the White House, why would we be surprised that we have more America ablaze?"

Trump was in California on Monday meeting with fire officials after deadly fires along the West Coast. He has repeatedly discounted the impact of climate change, walked away from a major international climate agreement and proudly rolled back environmental regulations.

Biden's running mate, California Sen. Kamala Harris, will return to her home state on Tuesday to meet with emergency service personnel to be briefed on the state's wildfires.

The August Complex Fire in Northern California is now the largest fire in the state since record-keeping began. Several other fires that started in August have also climbed the list of the largest in recent history, according to data from CAL FIRE.

Scientists say the wildfires are all but inevitable, but that the main drivers are plants and trees drying out due to climate change and more people living closer to areas that burn. Forest thinning and controlled burns have proven challenging to implement on the scale needed to combat those threats.

Biden released a $2 trillion plan in July to boost investment in clean energy and stop all climate-damaging emissions from U.S. power plants by 2035. But as the wildfires rage, some climate activists have expressed frustration that Biden has not been more forceful on the issue. He has not embraced, for instance, some of the most progressive elements of the Green New Deal.