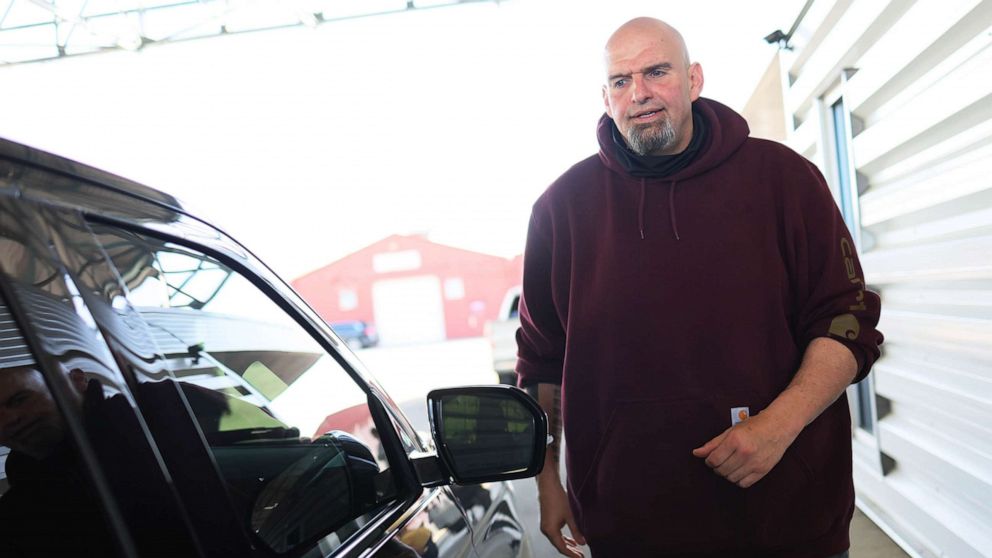 Pennsylvania's Lt. Gov John Fetterman, the leading Democratic candidate in the Pennsylvania Senate race, said Sunday that he suffered a stroke on Friday.

"I had a stroke that was caused by a clot from my heart being in an A-fib rhythm for too long," Fetterman said in a statement released Sunday afternoon.

"The good news is I'm feeling much better, and the doctors tell me I didn't suffer any cognitive damage. I'm well on my way to a full recovery. So I have a lot to be thankful for. They're keeping me here for now for observation, but I should be out of here sometime soon. The doctors have assured me that I'll be able to get back on the trail, but first I need to take a minute, get some rest, and recover," he added.

Fetterman and his wife, who he credited for catching his stroke symptoms, also posted a video from a hospital. Giselle Fetterman poked fun at her husband.

"I made you get checked out, 'cause I was right, as always," she said in the video.

It is unclear when Fetterman will return to the trail ahead of Tuesday's primary election.

Dave McCormick, a businessman who is running for Senate in the Republican primary election, sent well wishes to John Fetterman later on Sunday. "Glad to hear you're doing well, John. Wishing you a fast recovery," McCormick tweeted.

Dr. Mehmet Oz, a former talk show host who has former President Donald Trump's endorsement in the Republican Senate primary, also tweeted, "I have cared for atrial fibrillation patients and witnessed the miracles of modern medicine in the treatment of strokes, so I am thankful that you received care so quickly. My whole family is praying for your speedy recovery."

Fetterman, who has served as Pennsylvania's lieutenant governor since 2019, has staked out progressive positions during his primary campaign. Among other Democrats, he faces fellow progressive state Rep. Malcolm Kenyatta and centrist Rep. Conor Lamb in Tuesday's primary.

Lamb, who is trailing Fetterman, sent well wishes via tweet:

"I just found out on live TV that Lieutenant Governor Fetterman suffered a stroke. Hayley and I are keeping John and his family in our prayers and wishing him a full and speedy recovery," Lamb said.

State Rep. Malcolm Kenyatta, who is behind Fetterman and Lamb respectively in recent polling, also weighed in.

"As I said at the first debate, John Fetterman is an incredible family man. My prayers are with him and his family as he recovers from this stroke. I look forward to seeing him back on the campaign trail soon," he said.