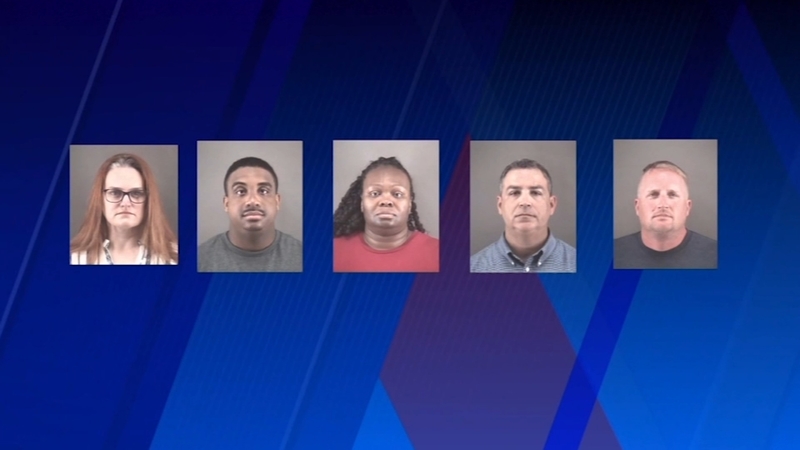 WINSTON-SALEM, N.C. -- Five former detention officers and a nurse at a North Carolina jail have been charged with involuntary manslaughter after a man died last December, a district attorney said Wednesday.

The five officers are free on $15,000 unsecured bond apiece, and it's not known if they have attorneys.

The nurse hadn't been served with an arrest warrant as of Wednesday afternoon, authorities said.

John Neville, 57, died Dec. 4, 2019, four days after Kernersville police arrested him on a misdemeanor charge of assault on a female.

According to O'Neill, Neville, who was Black, was placed in a prone restraint, meaning he was face down and restrained in some fashion. As a result, Neville was unable to breathe, which caused a brain injury that would eventually kill him, O'Neill said.

It happened after his cellmate saw him having what appeared to be a seizure in the middle of the night and called for the emergency response team.

The medical examiner's report says that Neville uttered "Let me go," "Help me up," and "Mama," while he was being restrained by the team.
After metal restraints secured his ankles, the team members rolled him onto his stomach to handcuff his wrists. He uttered "I can't breathe" once while on his stomach.

There is video of the incident but it has not been publicly released. The Forsyth County Sheriff's Office took seven months to issues a statement about his death, prompted by questions from the Winston-Salem Journal.

In a statement, the sheriff's office said Neville "experienced a medical emergency," and was taken to Wake Forest Baptist Medical Center in Winston-Salem, where he later died. The hospital conducted an autopsy the day after he died. Tracy Spry, a medicolegal autopsy coordinator for Wake Forest's autopsy pathology department, said a direct cause of death was not identified at autopsy, thus his death certificate was listed as 'pending' upon completion.