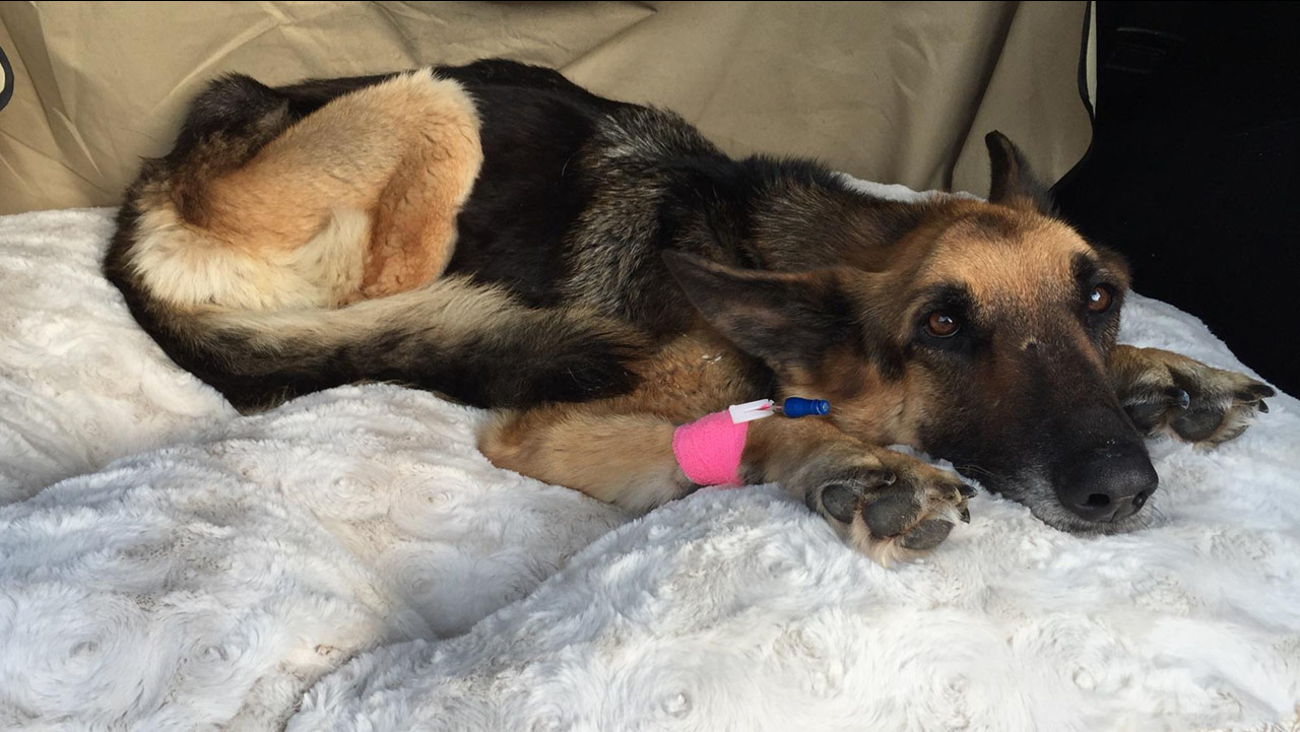 HOKE COUNTY, N.C. (WTVD) -- Hope, as she's now known, is a retired North Carolina police dog who was in bad shape when she was rescued by animal control a little over a week ago.

Nicole Rodgers, a veterinary technician with Pine Tree Animal Hospital, said Hope is making great progress in her recovery now, and was finally able to leave the hospital for the first time Monday night. But things were not looking so good for the 8 or 9 year old German Shepard at first. 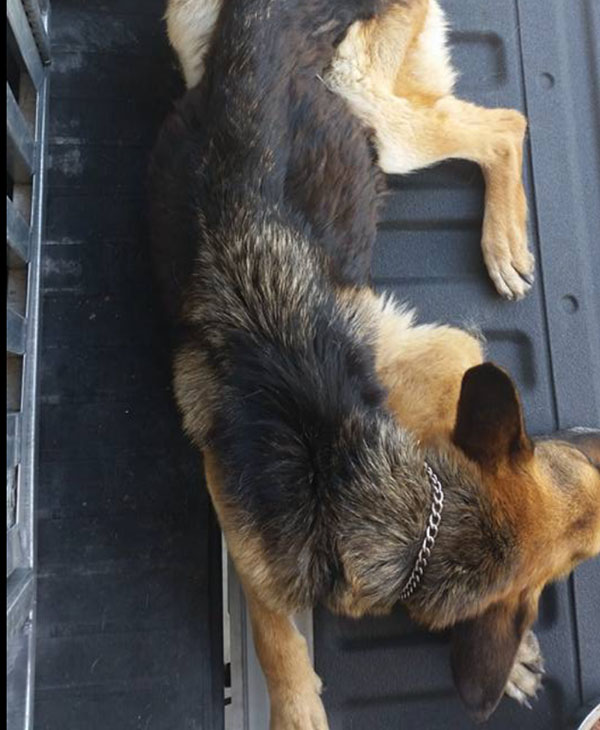 "I work at the emergency hospital that she was brought to Sunday and in that time decided that I really liked the dog and I was going to help her, or help them, in any way I could so I offered to foster the dog" Rogers said.

"Up until Sunday, she needed constant IV fluids to re-hydrate her because she was severely emaciated. She was 38 pounds when she came in and she's supposed to weigh anywhere in between about 70 and 80 pounds, and then she also has to be fed about every 4 hours as well," she continued. 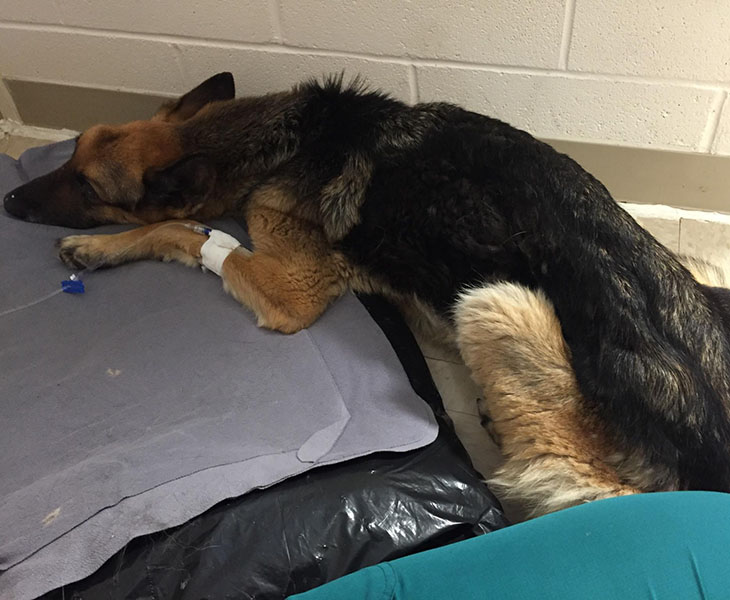 "She came in unable to walk on her own. She's so weak and so emaciated that she is, literally when you look at her, you see nothing but skin and bone, and you can see every rib in her body," she said.

"Not able to pretty much even lift her own head up. After a couple days she was able to start walking, but she wouldn't be able to make it more than a few feet and she'd kind of fall over as far as that went, had a ravenous appetite the whole time," she continued.

Rogers said the Hope's blood work is a sign that the retired K9 hadn't had anything to eat or drink for a while, and the dog's case is being investigated by the Hoke County Sheriff's Office. 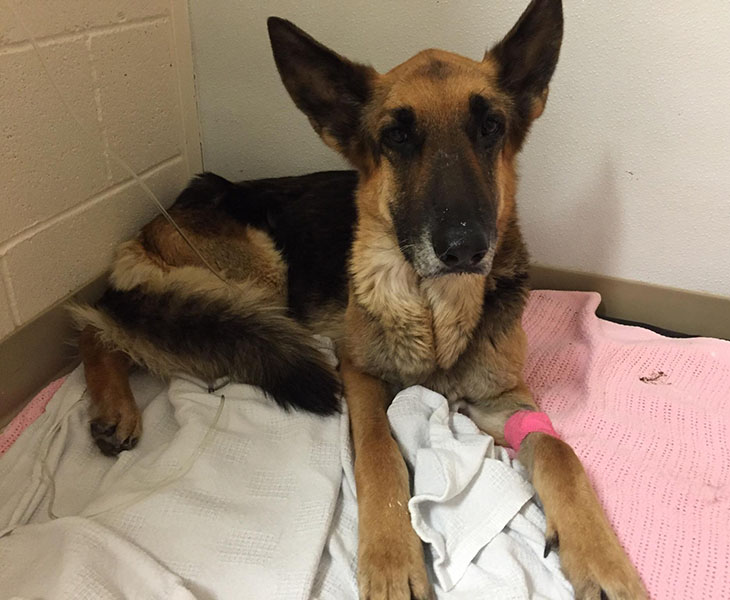 "She was pretty dehydrated, very anemic, meaning she didn't have much blood, meaning her body had stopped making blood because it was so malnourished and stuff," she said.

"Her platelets were pretty low to begin with. They were pretty low in the beginning but again that's because her body had basically stopped producing them. And then you have your chemistries, which are just checking all your organ functions, and she was kind of going into renal failure and kidney failure. Thankfully it was all reversible," she continued.

Hope was brought into the animal ER by a local non-profit rescue group called T.A.R.A., and now the group is in need of help to pay for Hope's emergency care bills.

While Hope couldn't stand, sit, or bark when she was first found, Rogers said all that has since changed.

"Thursday we started actually making noises and she would bark whenever . . . she's grown very attached to me just because I've been spending so much time with her . . . but basically if she ever heard my voice and didn't see me she'd start barking and whining.

"She pretty much knows when four hours is up on the dot, when it's time for food, and she'll start getting all excited and stuff too. Now she's able to walk on her own. I mean, I have not seen her falling or stumble in about three or four days, Rogers said. 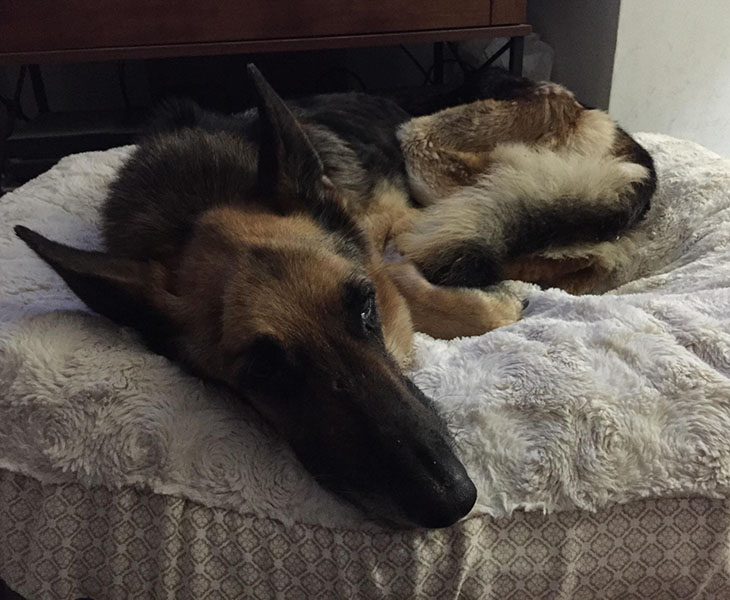 The vet tech said she's grown just as attached to Hope and hopes to adopt her herself if everything goes well.

"I have two German Shepherds at home and one of them was a retired police dog as well . . . so I'm obviously very biased towards Shepherds in general. Basically seeing she was a Shepherd, I was just kind of like 'I want to foster her,' and then it's been this whole week that I've been taking care of her, and taking her back and forth from the ER to the day practice," she said. 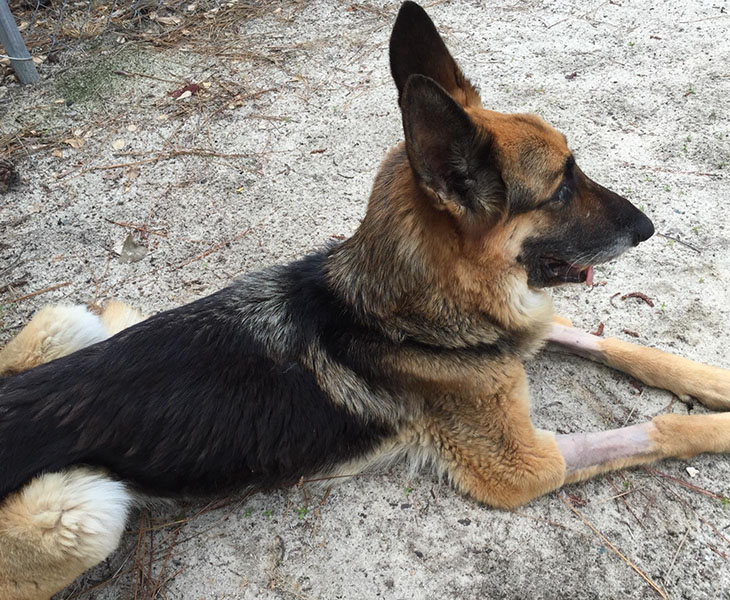