Sen. Kamala Harris campaigns in Wake County as she tries to become first female VP in US history 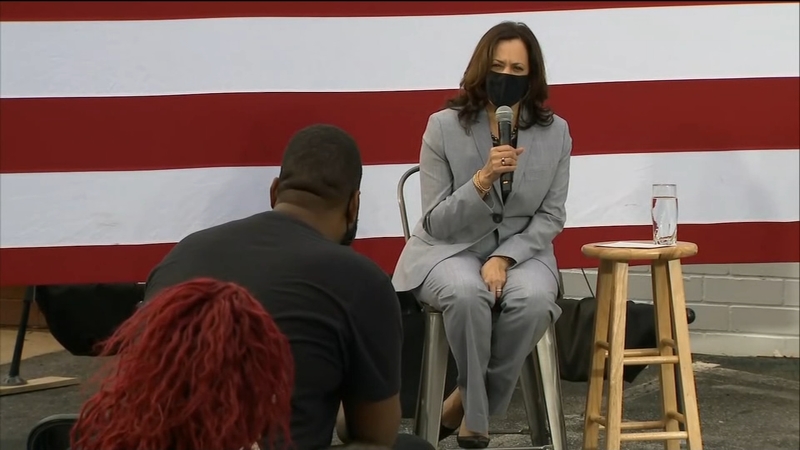 RALEIGH, N.C. (WTVD) -- Wake County is serving as another stop on the campaign trail for both Democrats and Republicans. Democratic vice presidential nominee, Sen. Kamala Harris, and the president's daughter-in-law, Lara Trump, are scheduled for appearances Monday afternoon.

Harris arrived in Wake County around noon and spoke at Shaw University around 2:45 p.m.

Harris spoke about about the Supreme Court and what's at stake in this election for the American people, from the Affordable Care Act to other issues affecting their everyday lives.

"We lost a giant, not only of the court, but of American life. It was a celebration. Few people in our history have done more to change the lives of the American people than Ruth Bader Ginsburg did as a lawyer and advocate and a Supreme Court justice," Harris said. "And it was an inspiration, and a call to each of us, for each of us to be better, to stay in the fight, and stay committed to what motivated Justice Ginsburg the most."

In her speech, Harris touched upon President Trump's recent nomination of Amy Coney Barrett to the Supreme Court.

Harris remarked Shaw University was one of the nation's first Black landmarks of higher learning in the years following the Civil War, noting she was standing in Estey Hall -- the country's first university building constructed to educate Black women in America.

After her speech at Shaw University in Raleigh, Democratic vice presidential nominee Kamala Harris was greeted by the Shaw drumline, marching band and cheerleaders. https://t.co/BsmJDchAKe pic.twitter.com/khf2jZ3QEP

Shortly after, Harris wrapped up her visit at a Sister to Sister meets Shop Talk roundtable where she will hear from Black North Carolinians and highlight the importance of voting to affect change.

Who is Sen. Kamala Harris?

President Donald Trump and Vice President Mike Pence have both recently been in North Carolina. Trump has traveled to the state more than a dozen times in his presidency.