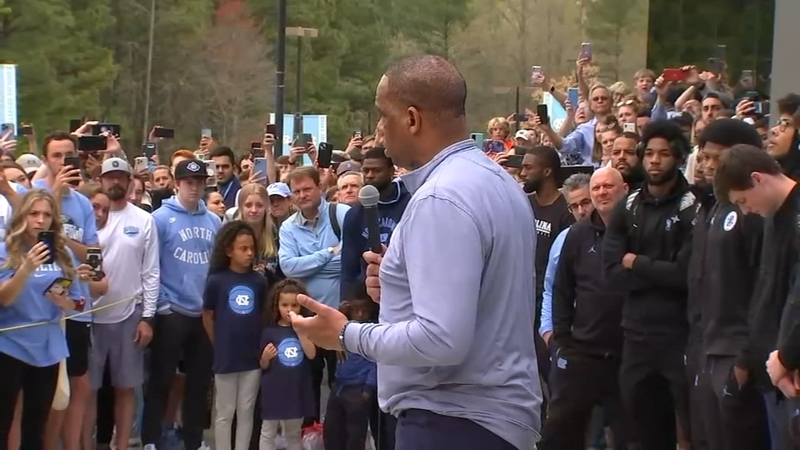 The eighth-seeded Tar Heels ultimately fell 3 points short of top-seeded Kansas despite building an early 16-point lead. It was the largest collapse in NCAA title-game history.

"I can't remember a time in my life where I should be disappointed, but I am filled with so much pride. I'm so proud of these guys of what they have done for themselves, individually (and) as a team," first-year UNC head coach Hubert Davis said.

Fans outside Dean Dome are watching live feed @UNC_Basketball on the road back from RDU. Overheard in the crowd: “Come on back boys.” @ABC11_WTVD pic.twitter.com/GKlFHH4TOA

Still, few thought just a few weeks ago that the Tar Heels would even be in position to win a title this year. The team suffered multiple lopsided losses during the regular season but found its footing and made a strong run through the NCAA tournament.

Students and fans surely wanted a different outcome in Monday night's championship, but many came out to greet and cheer on the team for a hard-fought and extremely successful season.

UNC's charter flight was scheduled to leave New Orleans around noon Tuesday. However, the flight had been delayed about 30 minutes because of weather causing flight delays across the country.

The team landed at Raleigh-Durham International Airport around 2:30 p.m.

After the team landed, it boarded a bus and made the 17 mile drive back to the Dean E. Smith Center.

Davis addressed the crowd outside the Smith Center.