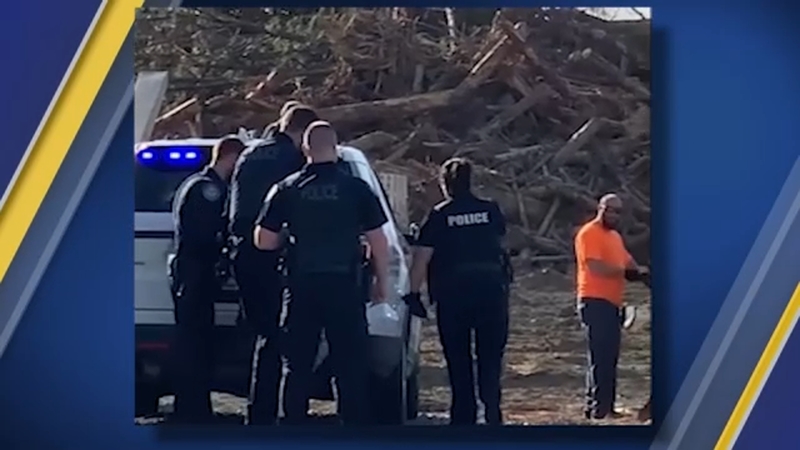 KNIGHTDALE, N.C. (WTVD) -- A video of an altercation in Knightdale shows a woman swinging at a few middle-school students while they were walking home from the bus on Friday afternoon.

Knightdale Police Chief Lawrence Capps said in a statement that the woman, Elaine Harrison, questioned the teenagers on where they lived, yelled at them, and then exited her car to physically confront them.

"It was terrifying to see this grown woman with him in a headlock and punching at him. He had a cut under his right eye from her fingernail very close to his eye, and he wears glasses. So he was very fortunate," said the grandmother of one of the 13-year-old victims. She and other families chose to not share their names to keep their identity partially protected.

The video shows Harrison throwing punches at one of the boys and chasing another into the street.

"It's very emotional to see the video," explained the mother of the 14-year-old victim who was chased into the street.

Another neighbor claimed before this that Harrison drove behind her daughter and yelled racial slurs.

"She started crying and screaming, and she ran the other way," the mother recalled.

Police later found Harrison at a nearby construction site verbally berating the workers. Police arrested her and charged her with assault and battery.

Wake County arrest records show Harrison has been charged multiple times in the past for assault, driving while under the influence, and breaking or entering, among others.

Harrison is out of jail and lives in the neighborhood, so a few families are concerned about a repeat incident.

"I wanted to know well what's to prevent her from doing this again?" one of the victim's mothers questioned.

The families are hoping the police do more to ensure students and the neighborhood are safe.

Families sent a letter to the mayor and police department on Monday urging them to give restraining orders for the six children involved and have an officer patrol the neighborhood after school.

"We want to see more. We want to know what our government officials are going to do to help us and make us feel like our kids are safe," one mother said.

Knightdale police said they will meet with the parents of the children later this week to discuss the situation. The parents are also working with the school to try to increase safety measures.