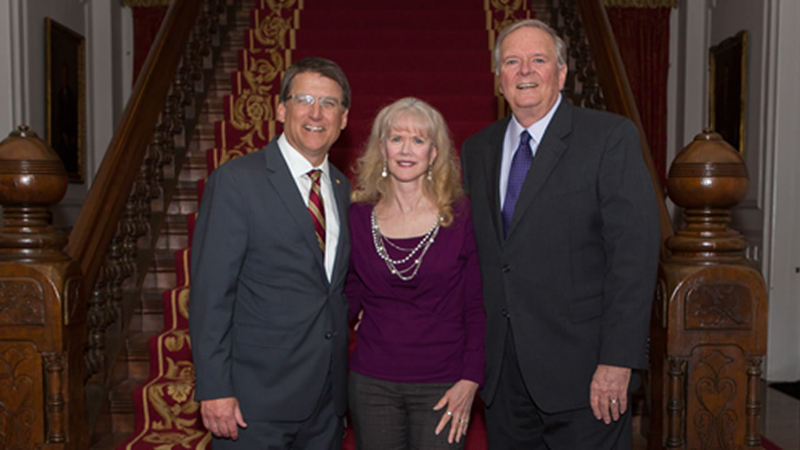 "Boy have we got a meal for you!" said Governor McCrory.

Larry announced his retirement from Eyewitness News in January after he learned he's been diagnosed with ALS or Lou Gehrig's disease.

In February, Governor McCrory presented Larry with the Order of the Long Leaf Pine. The honor is presented to people who have a proven record of service to the State of North Carolina.

During the presentation, the governor said he'd have Larry over for a meal.

"I was surprised at how open the Governor was with the mansion and how cordial and friendly he was with both Bobbi and me," said Larry Monday.

Stogner got the full tour of the building packed with state history.

"I was astounded at the size, the whole scope of the upstairs areas. Ceilings 17 feet and way more rooms than I ever imagined," said Larry.

Then there was dinner on the patio.

"I was going to tell you we had hot dogs, but that wouldn't work. We had filet mignon and it was absolutely top drawer," said Larry.

Larry says he could have never imagined the outpouring of love and concern from loved ones and viewers since he's announced his battle with ALS.

He's making his time count by contributing to ALS research. Sunday, he and ABC11 Together raised money through the Tobacco Road Marathon.

In two weeks, Larry hopes you'll help him up the-ante during an ALS walk in Raleigh by joining the ABC11 Stogner Strong team.