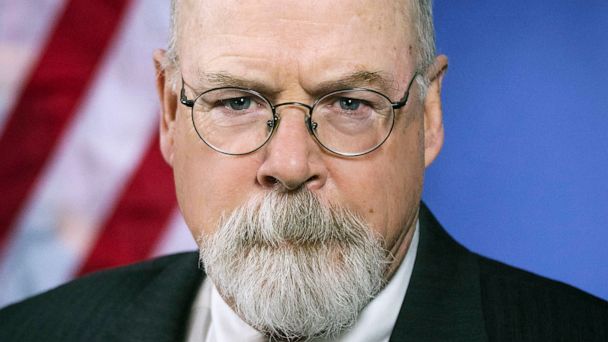 A lawyer whose firm represented Hillary Clinton's campaign during the 2016 presidential election was indicted Thursday by special counsel John Durham on a single charge of making a false statement to the FBI.

Michael Sussmann, an attorney for the Perkins Coie law firm who previously represented the Democratic National Committee following the hacking of its servers by Russia during the 2016 campaign, is accused of lying "about the capacity in which he was providing allegations to the FBI" when he met with a top lawyer from the bureau in September 2016 and provided him information about potential ties between a Russian bank and computer servers in the Trump Organization.


"Specifically, SUSSMANN state falsely that he was not doing his work on the aforementioned allegations "for any client," which led the FBI General Counsel (James A. Baker) to understand that SUSSMANN was acting as a good citizen merely passing along information, not as a paid advocate or political operative," prosecutors write in the indictment.

They allege instead that Sussmamn intentionally misled the FBI general counsel because he was acting at the time on behalf of an unnamed tech executive, an "U.S. internet company" and Hillary Clinton's Presidential Campaign.

Prior to his indictment Thursday, Sussmann's attorneys provided a statement to ABC News maintaining his innocence.

"Mr. Sussmann has committed no crime," attorneys Sean Berkowitz and Michael Bosworth of the law firm Latham and Watkins said. "Any prosecution here would be baseless, unprecedented, and an unwarranted deviation from the apolitical and principled way in which the Department of Justice is supposed to do its work."

"We are confident that if Mr. Sussmann is charged, he will prevail at trial and vindicate his good name," they added.

Durham was appointed by former Attorney General William Barr in May 2019 to investigate allegations of misconduct by members of the FBI and the intelligence community in their investigation of potential ties between Russia and former President Donald Trump's 2016 campaign for the presidency. Before his resignation, Barr appointed Durham as special counsel extending his tenure into the Biden administration.


While Durham's probe has long since lapsed the total duration of former special counsel Robert Mueller's investigation, prior to Thursday he had yielded only one indictment against a lower-level FBI lawyer who admitted to doctoring an email used in seeking surveillance against a former aide to Trump's campaign. That lawyer, Kevin Clinesmith, was sentenced to probation earlier this year.

Durham has been tasked with creating a report outlining his findings, though it will be up to Attorney General Merrick Garland to determine whether to make those findings public. Garland has said publicly he has no intention of interfering in Durham's work.

The indictment alleges Sussmann began in 2016 working with a U.S. tech executive and other cyber researchers in coordination with the Clinton campaign to assemble "white papers" on a potential communications channel between the Trump Organization and Russian-owned Alfa Bank. Sussmann later provided Baker with the documents in a Sept. 19, 2016 meeting where he is alleged to have made the false statement about who he was acting on behalf of at the time.

The connections were later examined by the FBI, but not substantiated.

In a 2017 deposition with House lawmakers, Sussmann said that he requested the meeting on behalf of a client who was a cybersecurity expert that held data he said showed ties between Alfa Bank and the Trump Organization. According to a source familiar with the matter, his legal team denied in meetings with Durham's team that his meeting with Baker was coordinated or on behalf of members of Clinton's campaign.

The meeting between Sussman and Baker occurred more than a month after the FBI's "Crossfire Hurricane" investigation -- looking into whether people associated with the Trump campaign were coordinating, wittingly or unwittingly, with the Russian government's efforts to interfere with the 2016 campaign -- was opened on July 31.


Days earlier, on July 27, 2016, then-candidate Trump said publicly at a campaign event, "Russia, if you're listening, I hope you're able to find the more than 30,000 emails that are missing." This was an apparent reference to Clinton emails that had been stored on a private server during the time she had served as secretary of state.

In the spring of 2016, Russian military intelligence had hacked into the computer networks of the Democratic Congressional Campaign Committee and the Democratic National Committee. Emails and documents stolen by the Russians had already been leaked in June and July of 2016 and Trump continued to encourage more leaks as they continued throughout the campaign.

The New York Times, which first reported news of Durham's plans to seek an indictment against Sussmann, also reported that Garland has declined to overrule Durham's decision.

Sussmann's legal team has communicated to Durham's team that they believe his case will fall apart under scrutiny for several different reasons, a source said. They have noted that Sussmann's alleged statement to Baker was made nearly five years ago and in a private meeting with no witnesses. And they argue the statements identified by Durham are immaterial in that they likely had no significant impact on any actual investigation being conducted by the FBI at the time.