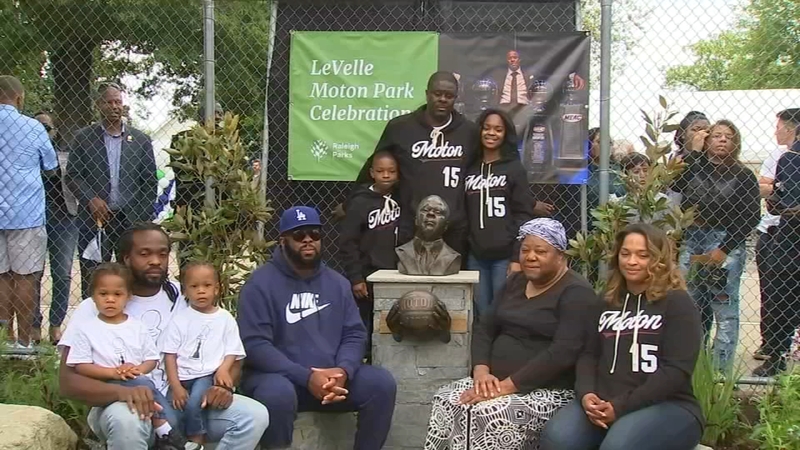 RALEIGH, N.C. (WTVD) -- LeVelle Moton has a lot of friends, and many of them greeted him with warm hugs as he entered the Raleigh park that now bears his name. He's written about challenges faced during his early years as a talented teen athlete in Raleigh and how he succeeded in life, as documented in his book "The Worst Times are the Best Times."

During the ceremony, facing a sea of smiling faces, the man who coached the North Carolina Central University men's basketball team to MEAC championships kept the crowd laughing as they recognized roles they played in his development.

The testimony that went straight to the heart of all who gathered to honor Moton came from his daughter Brooke.

"My dad is a great role model for me and my little brother. He pushes me every day to work hard for everything I do. Sometimes he makes me do things I don't like and I'm not interested in, like sports," she said, smiling at the joke they share. "I didn't know why I had to do these things, but finally I understand. He makes me do these things to set me up for success, and I'm grateful for that."

Moton made it clear that he's grateful too, for the many friends, family and teammates from his earliest days playing hoops. Several of them watched him choke back tears as he described their experiences as children looking for safe places to play.

"We ain't supposed to be here. We stared death in the eye way too many times for kids, and we normalized that." Moton said. "And I'm proud of y'all, because yall made it out just like me."

That's one of several moments during Moton's unscripted speech Saturday when he had to pause and collect himself before continuing his acknowledgement of teamwork's value.

Then the silent tears flowed as he saluted his mother and the role she played preparing him for success.

"Everything that I did, I did for this woman. To honor this woman, because I just wanted this woman to be proud of me. That was my biggest thing, as a son," he said.