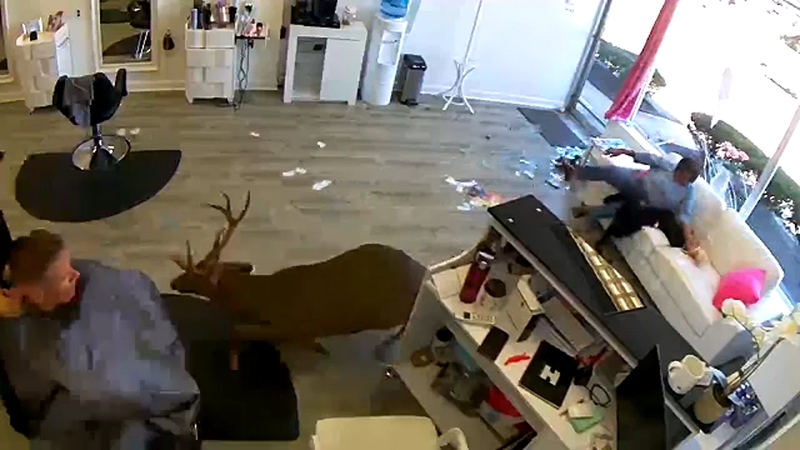 LAKE RONKONKOMA, New York -- A deer startled customers at a hair salon on Long Island after jumping through the window Saturday afternoon.

It happened at Be.you.tiful Hair Salon at 344 Portion Road in Lake Ronkonkoma just before 12:30 p.m.

Heredia was cutting a man's hair when, suddenly the deer shattered the window and burst inside.

"Pretty much I was screaming, you hear my scream," Heredia said. "I see him coming this way, and I don't know. I just don't even know how to react."

Heredia said the deer ran headlong into a tiny break room in the back, smearing the walls with blood, before running back through the salon and crashing through the front door with a hair straightener tangled in his antlers.

The deer charged across a busy four lane highway and vanished into the woods, and that's where they found the hair straightener -- in some bushes across the street.

"A lot went through my head really fast," salon employee Melissa Mulvey said. "It's like, where do you go? Left, right, run this way...I don't know what to do. She doesn't know what to do. I tried to jump up, there's nothing to jump on top of. And you just kind of, I don't know, those antlers were really scary."

No one was seriously injured, but the cleanup took the rest of the weekend.