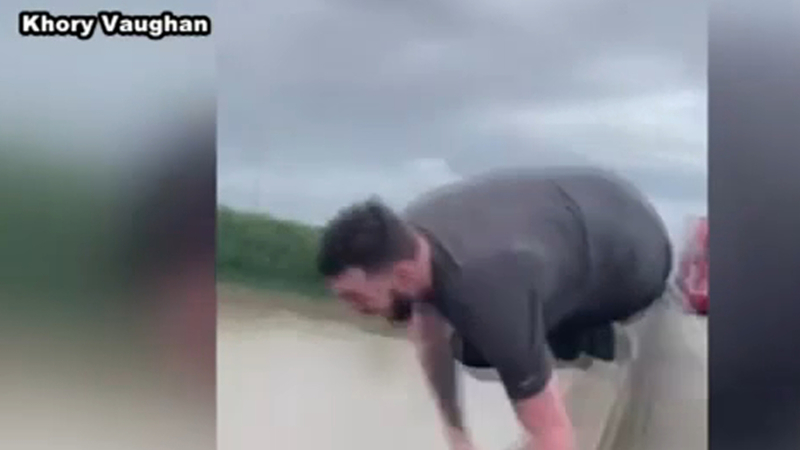 Man arrested after jumping into river from interstate bridge

LAFAYETTE, Louisiana -- A Louisiana man made a decision that could have been deadly. Instead, it got him in trouble with law enforcement.

Jimmy Jennings of Lafayette is seen on video jumping from Interstate 10 in Butte La Rose on Friday into the Atchafalaya River below.

Jennings told KATC-TV he got the idea while he was stranded in standstill traffic on the Atchafalaya Basin Bridge due to a 10-car pileup ahead.

"When I hit the water, my shoulder went up, I kind of hurt my shoulder, but I started swimming," Jennings said. "I couldn't get back to the bank because the current was way too strong."

What Jennings didn't expect was a shoulder injury from the impact of hitting the water. Plus, the strong river current kept him from swimming directly to shore.

Khory Vaughan, a friend of Jennings who was with him at the time of the stunt and recorded the video, told WBRZ-TV, "We are familiar with the water (and the area), but I don't think he was prepared for what came with it."

The jump set off an hourslong search for Jennings.
"I stayed in the water for probably about, I had a watch on, I looked at it, for probably about 2.5 to 3 hours. I thought I was going to die, but God saved me," Jennings said.


He eventually found himself on land again.

Jennings spent approximately an hour on an ATV trying to find his way back. He then realized he was on an island.

"It was pretty crazy me getting back to shore. I had to walk, where I was at, I couldn't even see the bridge anymore," Jennings said.

Jennings said he found a house and tried locating anyone for help.

He also found a boat and took it around to get back to civilization. That's when he was met by police.

"I was walking and heard officers come behind me with their guns and told me to put my hands up, but I couldn't since I hurt my shoulders from the fall," Jennings said. "They all had their guns on me. They were telling me to 'get on the ground, get on the ground.' So I got on the ground, listened to them, and they put me handcuffs."


Jennings said police brought him to an ambulance so he could be checked out by paramedics.

Vaughan said agents with the Louisiana Department of Wildlife and Fisheries rescued Jennings. Then, deputies from the St. Martin Parish Sheriff's Office put him in handcuffs.

Jennings later wrote on Facebook that jumping was a bad decision and he credited rescue crews with saving his life.