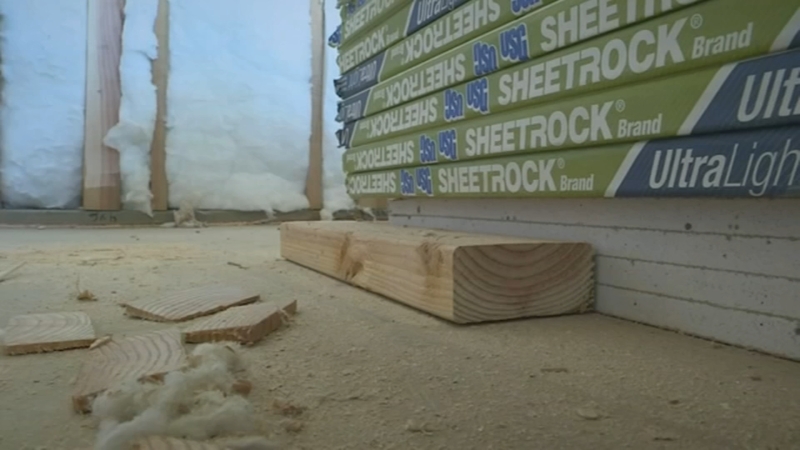 The Triangle is dealing with low inventory, as is much of the country, and an increase in thieves targeting home sites and stealing lumber, along with other supplies.

"It's an immediate problem," Dortch said. "We've looked at just getting our own private security to sit out (at homesites) because we're losing five, six, seven thousand dollars."

READ MORE: Why have lumber costs gone up?

He told ABC11 that he is hesitant to get police involved because the materials are less likely to get recovered and crime statistics are reported to the neighborhood -- which could make the home and area less desirable and have a negative impact on property value.

"It's going to make it harder to sell that house in that area in the future," he said. "The police are already backed up enough trying to keep up with more important things probably."

To make up for the loss in theft, Dortch and other builders, find somewhere to make up the cost elsewhere. Dortch said buyers won't feel the added cost builders have to deal with.

"(Buyers) probably won't even notice it," he said. "Honestly because prices have been bumping so fast and so quick, they probably wouldn't even see it or feel it."

Other builders, such as Homes by Dickerson, have also been hit hard by thieves.

"It occurs in any neighborhood that we're building in. Whether it be urban, rural, or anywhere in between," said Mike Mehringer, vice president of construction for Homes by Dickerson.

Mehringer said his company usually bypasses the insurance companies and absorbs the cost of the theft.

"Generally we're not going to report it unless it's something very substantial because the premiums that we receive rise as a result," Mehringer said. "We know that every job will be impacted somewhere, so we plan for it, we prep for it, and we also do a lot of work to guard against (theft) with the use of cameras."
Report a correction or typo
Related topics:
real estateraleighdurhamtheftreal estate developmenthousingconstruction
Copyright © 2022 WTVD-TV. All Rights Reserved.
TOP STORIES
Where abortion rights stand in NC after Roe v Wade decision
With Roe dead, some fear rollback of LGBTQ+ and other rights
Monkeypox: What is it? Health experts answer common questions
Brian Laundrie confession letter released: 'I ended her life'
Supreme Court overturns Roe in landmark case on abortion rights
False claims about abortion after Roe v. Wade case
Biden vows to 'do all in my power' to protect abortion access
Show More
NC politicians react to Supreme Court overturning Roe v Wade
Congress sends landmark gun violence compromise to Biden
How personal data could be used to enforce anti-abortion laws
How outlawing abortion could worsen maternal mortality crisis
How does overturning Roe v. Wade affect IVF treatments?
More TOP STORIES News