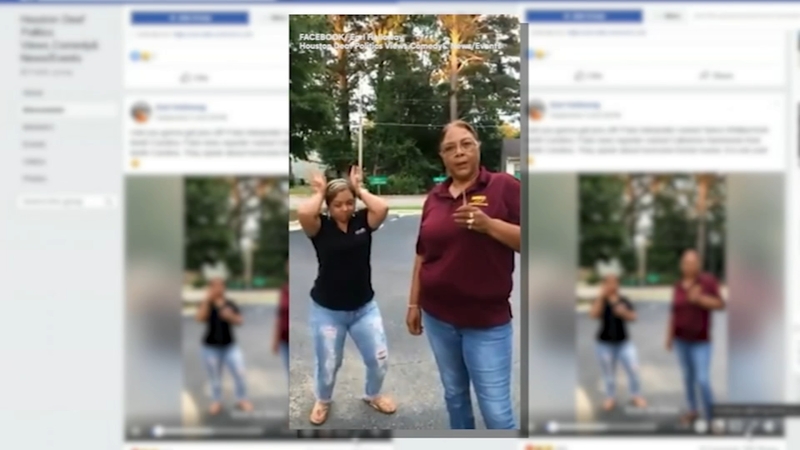 FAYETTEVILLE, N.C. (WTVD) -- Two 911 dispatchers are in hot water after a parody video of a news conference about Hurricane Dorian went viral.

In the video, one Lumberton EMS worker mocked sign language while the other "gave an update" on the storm.

The video was posted on the employees' personal Facebook pages and was later deleted, but not before being picked up by the "Houston Black Deaf Advocates," who reposted the video on Facebook.

ABC11 took the video to two interpreters who said the sign language was "gibberish."

Josie Croteau was the actual interpreter for Emergency Services during the official news conference in the days leading up to Dorian. She said she was outraged when she saw the video.

Croteau said she also took calls from her clients who found the video not only offensive but confusing.

"The lady that was pretending to be an interpreter had on a black shirt and interpreters' code of ethics we are supposed to wear dark-colored shirts that are skin-contrasting," Croteau said. "So it caused a little bit of confusion and some people in the deaf community thought she was hired, that this was an actual broadcast. And they didn't realize this was a farce and that their language was being made fun of."

The City of Lumberton released the following statement to ABC11:

"The City of Lumberton would like to state publicly that it in no way endorsed or approved the unfortunate video which was created by two of our 911 dispatchers depicting someone using sign language, and which appeared on one of their personal Facebook pages. In fact, the City very much disapproves of the video. This matter is being handled administratively, and training from the NC Division of Services for the Deaf and Hard of Hearing is being provided to city employees in the near future in order to prevent a recurrence of this type of activity and to provide greater awareness generally. The employee who posted the video has removed it, though we realize it has been disseminated, and both employees have made public apologies. We consider this to have been a serious error in judgment by two otherwise excellent employees.