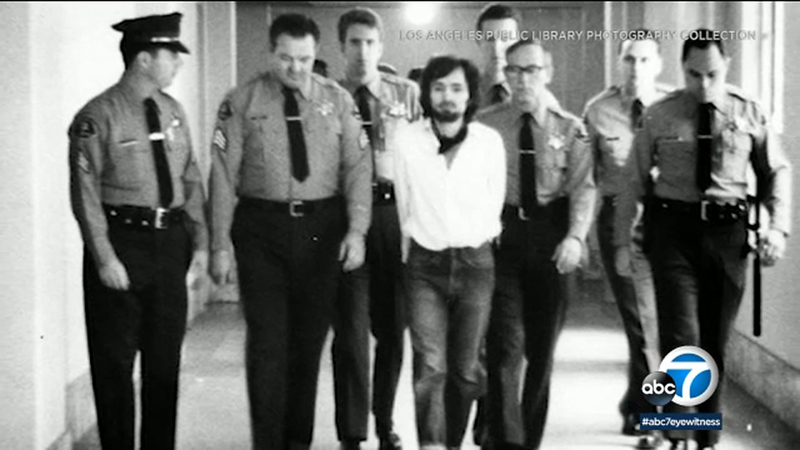 LOS ANGELES -- It's a grim anniversary for Southern California. Fifty years ago, one of the most frightening yet captivating chapters in Los Angeles history began. At the center of it was Charles Manson.

The summer of 1969 was all about peace and love. Woodstock was capturing the world's attention, and then, seven grisly murders occurred over two successive nights.

It changed the city. People began locking their doors, afraid of the dark.

The click of a light at the Los Angeles Police Department Museum in Highland Park reveals a hundred boxes that have been hidden away. The mere sight of them takes legendary Eyewitness News reporter, Al Wiman, back 50 years to the biggest story of his life.

On each box, you see a label: People vs. Manson. Inside are pieces from a moment in history that changed L.A. forever.

"As a matter of fact, we happened to be the first TV crew there on the morning the murders were discovered," Wiman said.

Through the years I've had the privilege of interviewing Wiman, trying to learn every nuance of one of the most dynamic stories of our time.

"When we arrived, there was this gate and it's locked and we see a car inside the gate and there's a body in the car," Wiman said.

That body was Stephen Parent, and it was just the beginning.

Wiman would soon learn five people were violently murdered at the home on Cielo Drive in Bel Air's Benedict Canyon, including actress Sharon Tate who was pregnant.

Two more murders occurred two miles away the next night. The victims were Leno and Rosemary LaBianca.

It was all so brutal and grotesque with messages written in blood on the wall, and no known killer. It left the city terrified for months.

Wiman kept meticulous notes, documenting every move, in a journal that now provides a glimpse of how history played out.

Perhaps his most significant entry was December 15th, 1969.

It happened four months after the murders, and Wiman would move from covering the story, to being in it.

In his journal you can find the entry written as: "Found Tate Clothes."

"I said I'm going to start a stopwatch, and I'm going to completely undress and re-dress and let's see how long it takes and where we are as we go up Benedict Canyon," Wiman said.

It took him 6 minutes and twenty seconds. They saw a wide spot in the road, and pulled over. They looked down the canyon and saw clothes on the hillside.

By simply reenacting the getaway, he found the killers' bloody clothes, linking the suspects to the crime.

"I called Lieutenant Robert Helder down at the LAPD and got him on the phone. He said, 'yeah, what do you want?' and I said 'Oh, I have something you want. We found the clothes'."

In 2009, I saw those clothes. Sandy Gibbons, who was then working for the Los Angeles District Attorney's office, opened the evidence boxes and gave us an exclusive look.

Gibbons said, "The clothing was actually found near the scene of the Tate murders by a film crew," Gibbons said. "I believe it was a Channel 7 film crew and eventually turned over to the police."

There was Rosemary La Bianca's driver's license, the blood stained rope that was wrapped around Sharon Tate's neck and many more items, each with a tragic story.

Gibbons knows these items so well because she was a reporter who covered the Manson trial.

"I don't think there'll be another one like it," she said. "Linda Deutsch from the AP, who also covered the trial, who I really met at the trial, said publicly that if this had been like the Simpson case and it had been televised, the entire nation would have stood still for 10 months."

Linda Deutsch, herself a legendary reporter, describes the surreal nature of the trial.

"It was something that no one else could experience who hadn't been there. It was so life-altering in many ways, because you saw a side of humanity that you didn't think existed," Deutsch said.

"What struck me most was how small he was. I think he was 5'3" at the most. He's a little guy and to build a myth of such power around such a small person, you have to have quite an ego and quite a sense of yourself, and he did," she said.

"It seemed to me he was a showman," Winman added. "He enjoyed all the attention."

Here is a timeline of the two-night killing rampage, the investigation and murder trial that followed, and the recollections of prosecutors and reporters: