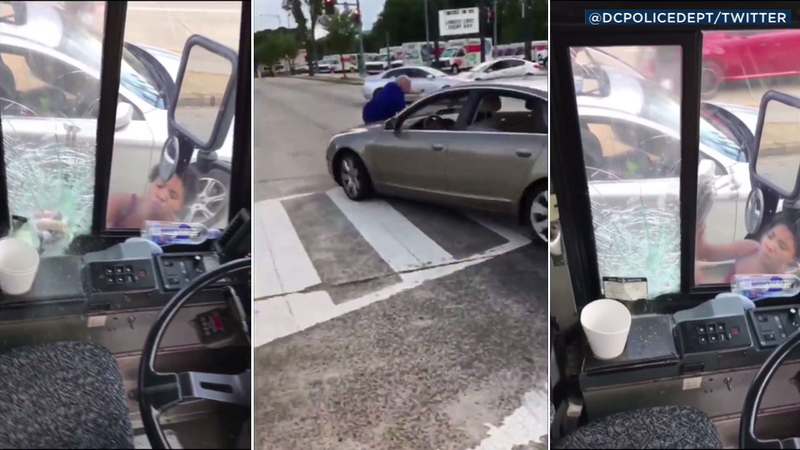 WASHINGTON -- A road rage incident turned violent in Washington D.C. as a woman got out of her vehicle and attacked a bus with a car jack.

The violence took place Thursday afternoon in the 1800 block of Bladensburg Road NE. The majority of the rage-filled incident was captured on cellphone video.

Authorities identified the woman as 20-year-old Mariana Silver. They said she was trying to illegally pass a bus and sideswiped another vehicle in the process. When the bus driver tried to make contact with her, the woman became irate and violent.

In the video, she is seen using what appeared to be a carjack she grabbed from her trunk to smash the driver's side window and knock off the side mirror. As she is doing that, another woman is seen in the center median on the phone, possibly calling police.

After Silver is done causing damage, she throws the jack back into her vehicle and gets into her car. But as she is about to leave, a man is standing in front of it in an attempt to stop her as he appears to also be on the phone with police.

Silver revs her vehicle forward, which causes the man to fall onto her car's hood. Silver then gets out of her vehicle and attempts to pull the man away. The people on the bus then get out and run over to the man, as well as other witnesses in the area.

A bystander steps in between the woman and man in front of her car in an attempt to stop the attack. But Silver soon gets in her vehicle and again, the man is knocked onto the hood of her car as she tries to leave.

In her final attempt, she drives off despite the man falling onto her hood and he ends up flying into the middle of the intersection as witnesses scream.

The man recording the video and the bystander who tried to help ran over to the man to make sure he is OK. They all walked back to the bus.

Authorities said the bus driver was OK and dropped off all the passengers at their stops despite the harrowing situation.