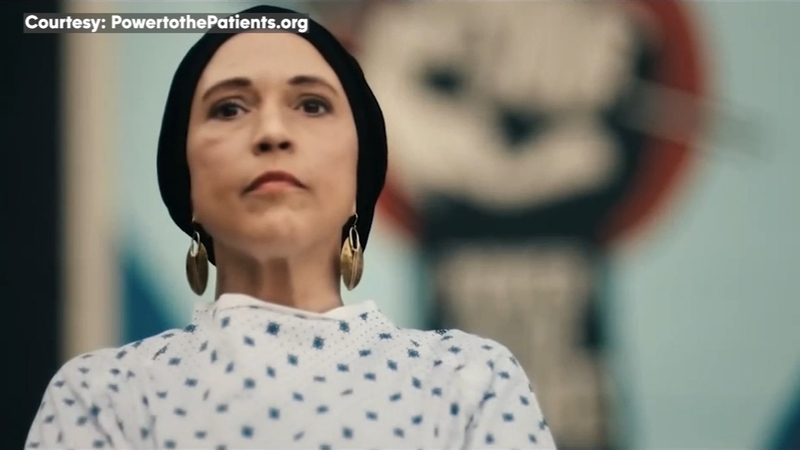 RALEIGH, N.C. (WTVD) -- A Wake County woman is helping spread the word that hospitals must now reveal prices negotiated with insurance companies to patients prior to procedures.

Christina Sanchez Root, a Raleigh cancer patient--is featured in a public service announcement for the group Power to the Patients.

Four months after the Price Transparency Rule took effect on January 1, Power to the Patients launched a major effort to let people across the country know it.

That included premiering a public service announcement during ABC's telecast of the Academy of Motion Picture Arts and Sciences (Oscars) awards.

The PSA begins with actress Susan Sarandon saying, "For far too long hospitals across this nation have profited from concealing prices from patients."

The video features a mural designed by artist Shepard Fairey replicated around the country, including one in downtown Raleigh on the back of the Trophy Brewing Company on West Morgan Street.

It also features a clip of Raleigh resident and cancer patient Christina Sanchez Root standing in front of the mural.

She's shown in a hospital gown and because she's currently undergoing chemotherapy treatments, her head is wrapped in a turban.

She appears as Sarandon says, "All hospitals must publicly publish their prices."

"That was exciting and I feel honored to be in it," Sanchez Root told ABC 11, adding that she only found out the day of the Oscars broadcast that her picture would be included.

So, she asked a friend to shoot video of her reaction--which shows her jumping up and down in front of the TV as she comes on the screen.

"It was thrilling," she said, "I mean, to be involved in something like that and see yourself in a commercial during the Oscars, of course is exciting."

But she's also serious about spreading the word about the new rule and Power to the Patients.

"I'm excited about what this can do to bring to consumers attention about the rights that they have now because the time to find out about this is not when you're, when you're sick and you have a million other things going on," Sanchez Root said.

She was first diagnosed with an aggressive form of breast cancer in 2015. It came back in September, has moved to other organs, and doctors are attacking it with chemo treatments.

She says that journey has left her with a vast knowledge about the intricacies of hospital billing--more than she ever wanted to know.

"The amount of stress that you're under when you're, when you have any kind of major illnesses, it's hard to comprehend what that's like," Sanchez Root said. "And it's just seems it's, it's almost cruel the amount of paperwork and bills and how much work goes into this."

She said during her first go-around with cancer, she was treated in a hospital emergency room but wasn't informed that the doctor handling her case was not in her insurance network. None of the bill was covered, and a few weeks later she was getting calls from collection agencies while she underwent chemo.

"That can change your whole your whole life, everything you've worked for, your credit, everything," she said, pausing as she choked up. "It's a big deal."