'Tell them their daughters are safe now': Message in a bottle found 13 years later in Alaska river 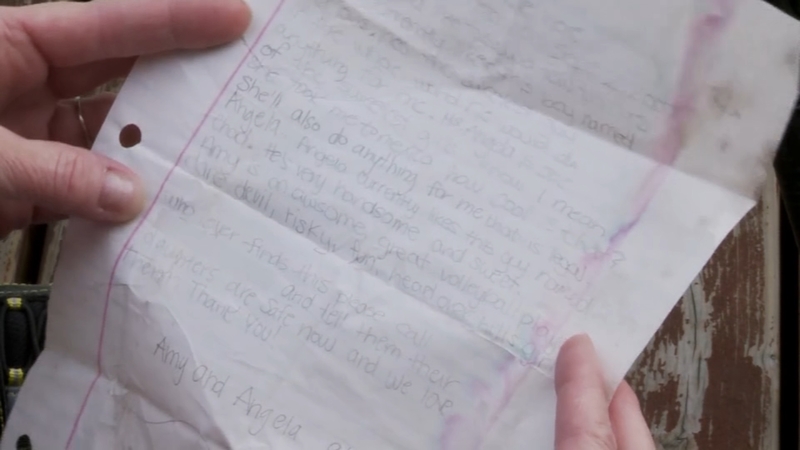 'Tell them their daughters are safe now': Message in a bottle found 13 years later in Alaska river

ANCHORAGE, Alaska -- A family camping in Alaska found a message in a bottle written 13 years ago.

Pat Brashler was with his 4-year-old grandson Jameson when they saw the bottle in the Little Susitna River.

"I just thought it was trash and he (Jameson) said, 'It's a message in a bottle!,'" Brashler recalled.

The message was written in pencil on lined notebook paper. The paper was sealed inside an IBC Root Beer glass bottle.

The message appeared to have been written Sept. 2, 2007 by two girls named Amy and Angela.

It starts out with the two girls describing their friendship and crushes they have, but toward the end it contains an ominous message.

"Whoever finds this, please call (phone number) and tell them their daughters are safe now, and we love them."

Brashler called the number, but it was disconnected.

Alaska State Troopers told KTUU that there are no known missing persons cases involving two females with those first names.

Brashler said he's not too worried about the wording of the letter.

"It sounds like a couple of teenagers were having fun camping and threw this bottle in the river, and it took a long time to get to where we found it," he said.

He is just hoping he can someday find the two girls and return their message to them.

"I hope they're okay and everything's going good and that they would be overjoyed to find this."

Full transcript of the message:

"Amy and Angela were here camping in Houston (Alaska) on September 2, 2007, and would like to say a few things. Amy currently likes this boy named Darius. He's the sweetest guy in the whole world. He would do anything for me. Ms. Angela is one of the sweetest girls I know. I mean, she took me to Mexico, how cool is that? She'll also do anything for me that is legal. Angela... Angela currently likes this guy named Chad. He's very handsome and sweet. Amy is an awesome, great volleyball player, dare devil, risky, fun, head over hills (sic) girl. Whoever finds this, please call (phone number) and tell them their daughters are safe now and we love them. Thank you! Amy and Angela 9/2/07."
Report a correction or typo
TOP STORIES
Snow likely to stick around due to cold temperatures
Aerial views of Triangle area covered in snow
Slick roads found across central NC
Truck with 100 monkeys crashes, 1 still on the loose, police say
Booster shots needed against omicron, CDC studies show
How to make snow cream
Delta flight slides off taxiway after landing at RDU
Show More
Anti-mask parent threatens to bring guns to school: 'Loaded and ready'
Laundrie claimed responsibility for Petito's death in notebook: FBI
2 NYPD officers shot, 1 fatally, responding to domestic violence call
Person struck by vehicle on Western Blvd in Raleigh
City, county governments close services as wintry weather hits NC
More TOP STORIES News