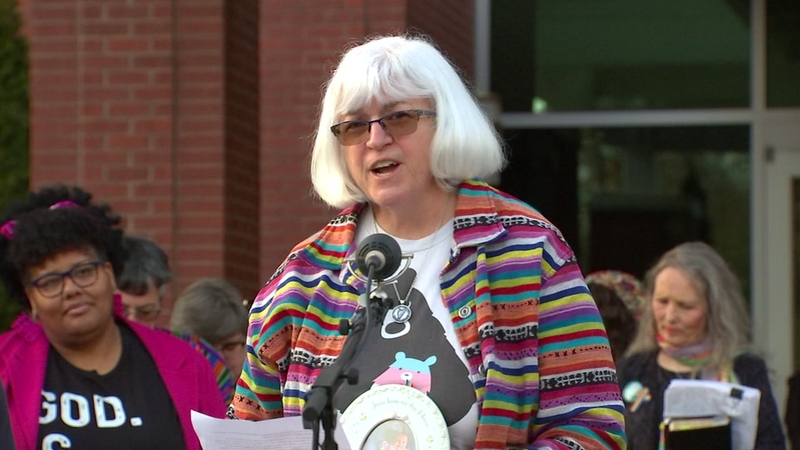 WAKE COUNTY, N.C. (WTVD) -- Members and clergy of the United Methodist Church showed their unity Thursday at an inclusion rally.

The rally was in response to last month's decision by the larger church to uphold its ban on same-sex marriage and the ordination of LGBTQ clergy.

"I feel very strongly about the issue," said Bob Wind, a member of Edenton Street United Methodist Church in downtown Raleigh. "I think all LGBTQ people should be included in our community and our community of faith. I'm concerned about what the conference decided."

America's second-largest Protestant denomination rejected a proposal that would have let regional and local church bodies decide for themselves on gay-friendly policies--instead, they opted for the Traditional Plan.

The Traditional Plan's success was due to an alliance of conservatives from the U.S. and overseas. About 43 percent of the delegates were from abroad, mostly Africa, and overwhelmingly supported the LGBTQ bans.

"We wanted to show the area that not all United Methodists are supportive of the Traditional Plan and there are many of us who don't want to have a church without our gay, lesbian, transgender and bisexual folks with us," said Tuck Taylor, pastor at West Nash United Methodist Church in Wilson.

Several speakers addressed the crowd. Many wrote their names on ribbons and attached those ribbons to a cross to symbolize that everyone is a child of God.

"I don't understand any world where if God is love that there's any way that anybody loving another person would be incompatible with Christian teaching at all," said Jennifer Gedeon, who added that she nearly became an ordained minister in the church. "For me, it's a reminder that I'm here because I'm an agent of change. Otherwise, I would need to go somewhere else to reflect my beliefs."

At the end of the service, organizers handed a petition that had been signed by nearly 1,400 reaffirming unity to Bishop Hope Morgan Ward, a resident bishop in the Raleigh area.

Morgan said in part, "As a church, we've lost our way and tonight is the time to renew our connection with one another."