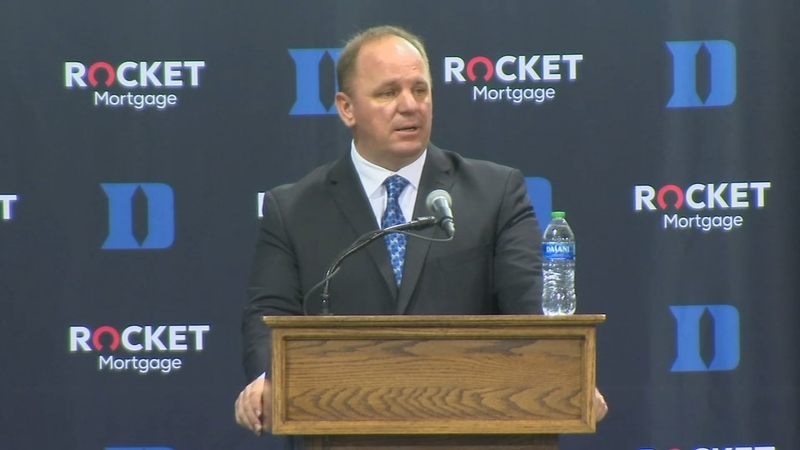 DURHAM, N.C. (WTVD) -- The news conference could not have gone much smoother for Duke's 22nd head football coach, Mike Elko.

"Now is the time," Elko said. "I cannot wait to pour every ounce of energy and passion that I have for this great game into this program and this university."

Elko, who officially got his first head coaching job Friday, laid out his intentions to pull from his past experience at institutions similar in academics having spent time at both Wake Forest and Notre Dame.

Mike Elko is the 22nd football coach at Duke. pic.twitter.com/tzRUBYIm5W

Elko has been the defensive coordinator and safeties coach at Texas A&M University for the past four seasons.

That's certainly not the case on the field these days. The Blue Devils ride an eight-game losing skid into the winter, coupled with three consecutive losing seasons. Turning the ship shouldn't be nearly as difficult, however, with the groundwork laid by former coach David Cutcliffe.

"There are a lot of things about Duke right now that are not the same as Duke 15 years ago, and that's a winning tradition a little bit over the recent history, too," Elko said.

Facilities aren't the same either. Wallace Wade Stadium went through a $4 million renovation. The Pascal Field House, the site of Monday's news conference was built. But the locker and meeting rooms inside the Yoh Center aren't up to snuff.

Mike Elko speaks about his plans for bringing successfully football to Duke University.

"That's kind of the last piece for now in the college arms race, but I was upfront with Coach Elko, it's going to take significant philanthropic support to do some renovations there," King said.

Elko addressed current Duke players briefly before the official introduction and appeared to give a good first impression.

"The passion inside him is truly genuine, said defensive tackle DeWayne Carter. "He really wants to win, and he's proven he can win and be one of the best in the country, so that's what's exciting to me."