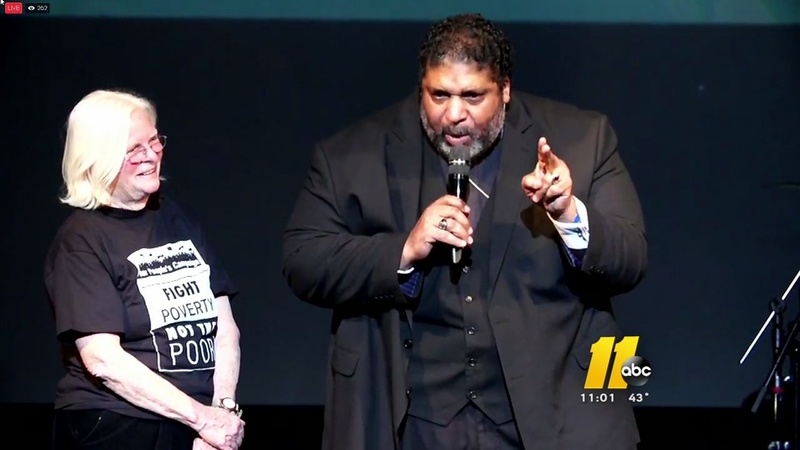 WASHINGTON (WTVD) -- Back in 2013, it began as a small protest at the North Carolina Legislature with just over a dozen people. It grew into a movement dubbed Moral Monday; thousands of protesters took part, 1,000 were arrested including the Rev. William Barber, the face of the movement.

On Monday, Barber laid out his plan to replicate what happened in Raleigh on a national scale.

With a theater full of supporters cheering him on in Washington D.C. and an audience streaming it live on Facebook, Barber officially took Moral Monday national.

The nighttime event sponsored by Ben and Jerry's (the ice cream entrepreneurs were even there on stage with Barber) was the finale of an all-day rollout in the nation's capital.

At a daytime news conference, Barber led supporters in an introduction of the movement's title. "When you say it, say the whole thing, The Poor People's Campaign: A National Call for Moral Revival!"

Flanked by faith leaders from across the country, Barber called for 40 days of civil disobedience and voter registration pushes - modeled on the strategy he devised to protest the Republican-led agenda in the North Carolina legislature, which linked public policy to Barber's reading of biblical morality.

Irving Joyner, long-time legal counsel to the North Carolina NAACP was at Barber's side for many of those Moral Mondays in Raleigh protesting the GOP agenda on statewide voting restrictions and voter identification that protesters argued were aimed at suppressing minority voting and the Republican refusal to expand Medicaid in North Carolina under the Affordable Care Act.

Joyner said he never imagined what began here on a state and local level would transform into a national movement. He said just 18 people showed up for the first protest 4 years ago.
"Then week after week, the numbers literally doubled and continued until there were more than 1,000 people arrested for standing up," he said.

On Monday afternoon, like he did so many times at the legislature in Raleigh, Barber marched into the U.S. Capitol to deliver a letter to Sen. Mitch McConnell, the top Republican in the Senate, blasting the GOP tax plan as "one of the most immoral laws in U.S. history."

Some of Barber's critics call him a "bully," more interested in partisan politics than biblical teaching.

And four years after Moral Mondays began in Raleigh, both chambers of the state legislature are still controlled by the party whose policies Barber fought so hard against.

Nevertheless, Joyner insisted the movement was a success.

Barber left Capitol Hill without seeing McConnell but pledged to return every first Monday until Mother's Day when the group said it will turn up the pressure. They will start refusing to leave. That may lead to arrests. Just like what we saw so many times here in Raleigh.
Report a correction or typo
Related topics:
politicsraleighwake countyproteststate politicsgeneral assemblymoral mondayu.s. & worldraleigh news
Copyright © 2022 WTVD-TV. All Rights Reserved.
TOP STORIES
LIVE: Snow moving out, windy and cold conditions settling in
New study highlights where you are most likely to catch COVID-19
NC man denied life-saving kidney transplant over vaccination status
Widow delivers heart-wrenching eulogy for NYPD detective
In wake of Pittsburgh bridge collapse, how safe are NC's bridges?
Restaurants, battered by wintry weather, hope business stays brisk
News & Observer: There are 54,000 possible Cook Out combos
Show More
Cooper vetoes bill that would push NC primary to June 7
How many times can I reuse my N95 mask?
10 injured in PA bridge collapse; human chain formed to help
Decades after TV anchor disappears, convicted rapist denies connection
LATEST: Breakthrough cases make up 37% of new COVID infections
More TOP STORIES News