At least 7 stabbed at political rally in California 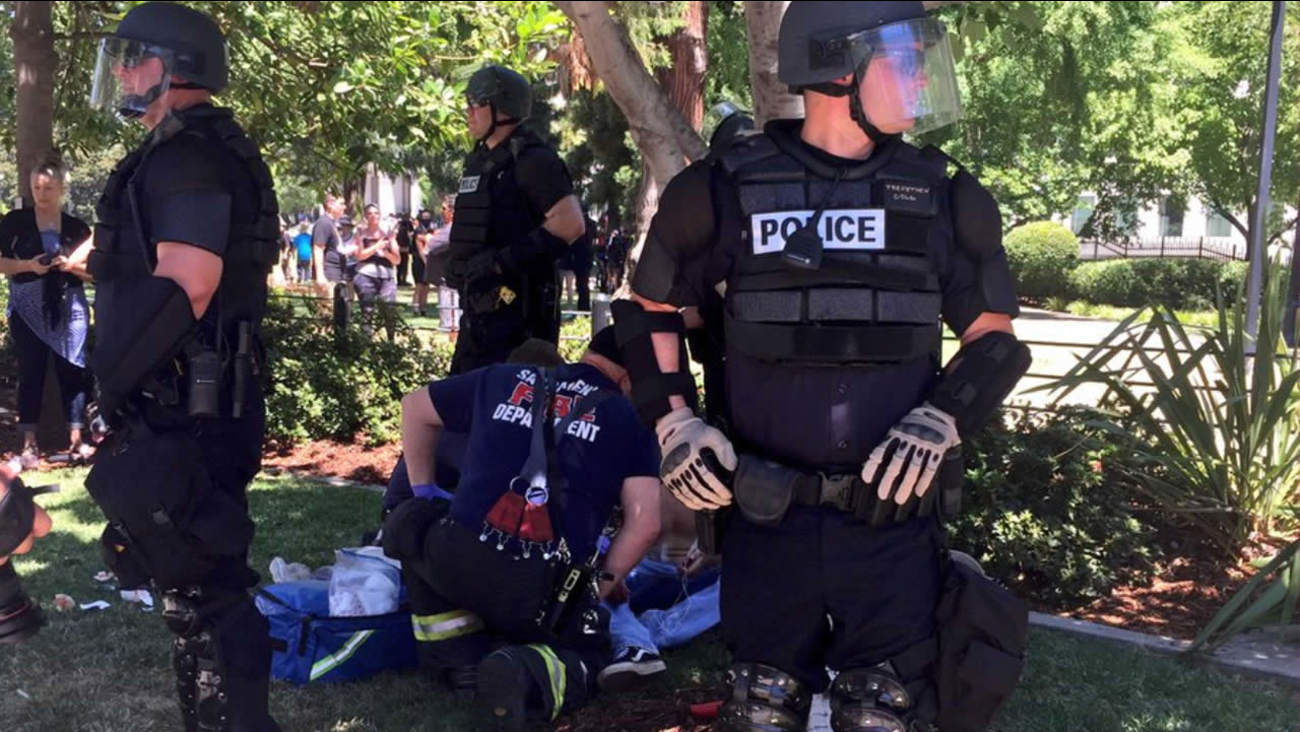 Police stand guard as a medic treats a stab victim after a rally turned violent at the Capitol in Sacramento, on Sunday, June 26,. 2016. (Photo courtesy of @ABC10Frances)

SACRAMENTO, Calif. -- At least seven people were stabbed, two with life-threatening injuries, at a political rally in Sacramento.

Sacramento Fire Department spokesman Chris Harvey says a rally by KKK and other right-wing extremists groups turned violent Sunday when they were met by counter protesters.

Officer Matt McPhail with the Sacramento Police Department says none of the injuries are believed to be life-threatening.

He says a large fight broke out after people carrying sticks rushed into the area where the rally was being held.

A clip of a media update from Sac Police. @ABC10 pic.twitter.com/zZuLr6aliv

Harvey says California Highway Patrol officers managed to break up the large fight but that some members of both groups remain in the area.

A reporter from the ABC News affiliate in Sacramento described the scene saying there is blood on the sidewalk of the park where the violence occurred and that police have taped off the area.

The rally was organized by group affiliated with the Traditionalist Workers Party, with links to white supremacists, who had permits to hold their rally.

The victims were all present while a protest took place, though McPhail said it was still unclear whether and how they were involved.

The Traditionalist Workers Party had scheduled and received a permit to protest at noon Sunday in front of the Capitol. McPhail says a group of counter-protesters showed up to demonstrate against them.

The Southern Poverty Law Center has described TWP as a group formed in 2015 as the political wing of the Traditionalist Youth Network, which aims to "indoctrinate high school and college students into white nationalism."

VIDEO: Police stepping in to stop a man from being attacked. @ABC10 pic.twitter.com/Wzd9Q8zt1j

Insane video. Crowd sees any signs of "Nazis" and they run&attack. A lot of people bleeding/getting maced. @ABC10 pic.twitter.com/PoFhILfZ95

L St btwn 10th and 15th & 10th btwn N and L are closed for traffic control during Capitol protest. Take alt routes pic.twitter.com/9AVJjDggPK